Tuesday night Al Horford had 27 points and 17 rebounds in his team's sixth consecutive victory to start the season.

Yes, Big Al is with the Atlanta Hawks now and it says something about the fall to mediocrity the Gators took last season. That line used to describe a Gator game. Now, two years past, we are still looking from someone to take the torch from Horford, Noah, Brewer and Green. This season is as much about the team as it is one player; Nick Calathes.

The Gators do not have the horses to win the SEC, much less the division. They don't have the old men to inspire a run like Georgia did either. (I'm getting the negativity out of the way now.) What Florida does have is a core group of players who got burned last season when they thought the name on their jersey guaranteed them a NCAA spot. Do they have the talent? Sure. Do they have the will to compete? Well, it is time to find out.

Last year, I outed myself as someone who was not convinced in the Nick Calathes Experience. In victories, he'd fill a boxscore. In losses, he contributed as much as the student section; just another person in a Gator jersey. He is the most talented player on the team and with the losses of Marreese Speights and Jai Lucas, he must lead the team this season. No more disappearing for 20 minutes at a time.

Lucas leaving is a blessing for the Gators. I wish him well, but for Lucas to bounce this close to the start of the season is a reflection on what has been happening in practice. Assumptions are not always correct, but it's not crazy to say Calathes will run the offense at the point, effectively pushing out Lucas who was exposed last season. Calathes belongs at the point and it was only a matter of time before Lucas realized this. 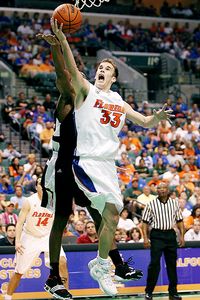 So now what happens now? Calathes needs to be able to carry the team when necessary but also push along a young front line with Alex Tyus and Chandler Parsons rotated with Kenny Kadji and Allan Chaney. Calathes is a sophomore like Tyus and Parsons and just a year older than Kadji and Chaney, but Calathes is (hopefully) mature enough to work them into the offense. We will see how this dynamic works in out-of-conference play and amend this prior to the SEC season. (I don't trust preseason stats, especially since lame duck Lucas got 20 minutes in the first game.)

I'll be in Gainesville this weekend and we will all get a better sense of the club when they play a real team (apologizes to Warner and Rollins College). Friday night UF plays Toledo and they return four starters. Plus, they have a chucker;

Tyrone Kent is a dangerous scoring threat, but that is mainly because he shoots way too much. The guard took over 400 shots this past season, netting just 36.3 percent of those attempts.

Bradley is a different story. They made the NIT last season (hey, just like the Gators!) but lost a significant amount of scoring in their backcourt. Like the typical mid-major, they have restocked with juco players. They are good enough to challenge the Gators, so they cannot just show up Sunday.

The Gators have one strength that continues. Billy Donovan is still a great coach who built a program out of nothing. Without Billy at the helm, there would not be as much confidence in the Gators this season. Whether this turns out to be a Sweet 16 season or another dud will depend on Billy's ability to inspire the team. Let's hope he can do it and Nick Calathes leads the way.