When I moved to Florida, one of the first things given to me was an Albert the Alligator sticker by a new neighbor. Not only was my neighbor a decent looking girl, she was very smart. Her brother was a dumb jackass. And a Florida State fan.

In elementary school, the UF-FSU game was generally played before Thanksgiving and in the lunchroom the Friday before someone would start the Gator chomp or Seminole chop. My teachers would do the chomp and so would my friends. The kids I could not stand and the lunchroom manager did the chop. It should also be noted that my two younger brothers, one who graduated from UF and another who roots for them, started as FSU fans.

We are socialized as children so it comes as no surprise that my passion for the University of Florida is followed by my personal hatred for Florida State. It trickles down to a preference for blue over garnet, orange over gold, Gainesville over Tallahassee, intelligence over stupidity. I can turn off my opinions for anything; politics, religion, music. But I cannot turn off my Gator fandom and my hatred of FSU. This is a perfect example:

Average Person: "Congratulations to Myron Rolle for being named a Rhodes Scholar."

Me: "I hope Myron Rolle gets his knee blown out and he can perform surgery on himself since he's premed." 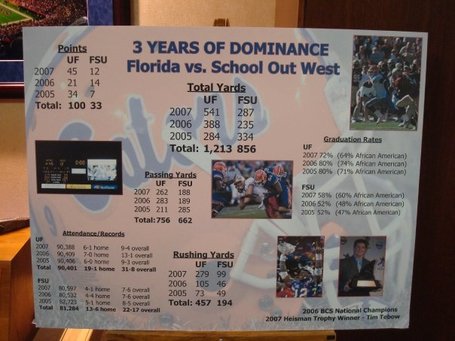 In one piece of cardboard, Urban Meyer gives red meat to every Gator. There is the football dominance, the popularity in attendance, and proof that Florida produces graduates including African-Americans. Remember, Meyer has a psychology degree, so he knows what buttons to push. He is also surrounded by younger Gators, which is probably the reason he had seen FSU and Tennessee has larger rivals than Georgia (until Urban destroyed Mark Richt this season). To the kids Meyer recruits, FSU is a football enemy. To the students, FSU is a wasteland that does nothing more than takes money that should go to UF to build their Erector Set Stadium and medical school (which is really a problem of state government, but when the Florida executive branch is two FSU grads, they get the blame). Like I said, I'm insane. But my love of Florida leads to my hate of FSU. And that is not insane. (By the way, today is only Monday. If I am like this now, can you imagine me on Saturday? And it'll be two weeks of this with Alabama coming up too.  This is the stiffest test of Championship Mode since the last time the Gators went to the SEC Championship. I hope you are ready.)