Orson had it right when he said it's no big deal Percy Harvin is hurt because he's always hurt. Last year, I went as far as to compare Harvin with another graceful but oft-injured athlete, Roberto Clemente.

Urban Meyer, either because he really doesn't know or he's showing a poker face (probably the latter), has not said anything conclusive about Harvin's status Saturday. With Chris Rainey nursing a sore groin from one of the two ways you can injure your groin, Harvin's injury is a bigger issue because Jeff Demps cannot handle the load of the other guys too. 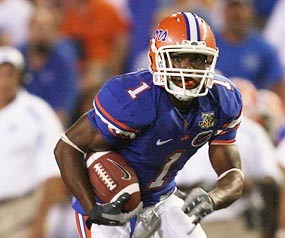 I do not see Harvin staying out of Saturday's game unless his leg is as bad as Barbaro's was. But there are a few factors. The turf in the Georgia Dome will not be as forgiving on his leg as natural grass, but the astroturf/grass difference is a lot less and it is an antiquated notion to assume artificial turf will be that much of a problem. Also, will Meyer force Harvin into the game plan? One or two plays will be enough to see Harvin's speed and how confident he is in his leg. If he isn't there, will Meyer keep him out for the game or hope the leg loosens and Harvin can play later?

If Harvin plays and UF wins, it will be one of two ways; he gets about 10 touches and is slowed but plays well. Or, he pulls a Willis Reed and inspires the team to victory. For those of you who don't know the story of Willis Reed;

It was Game 7 of the 1970 NBA Finals, and nobody knew if Willis Reed would play. The center and captain of the New York Knicks had suffered a torn muscle in his right thigh during Game 5 against the Los Angeles Lakers, and had not played in Game 6 when Wilt Chamberlain's 45 points and 27 rebounds enabled the Lakers to tie the series at 3-3.

When the teams took the floor for pre-game warmups, Reed was not with his New York teammates. He remained in the lockerroom, deep in the bowels of the building.

Reed took an injection to dull the pain in his leg, and just moments before tipoff he limped through the tunnel and onto the court. Waves of cheers cascaded down from the Garden stands as fans caught sight of the Knicks' captain, a sight that was not lost on New York's opponents.

"I saw the whole Laker team standing around staring at this man," said Knicks guard Walt Frazier. "When I saw that, when they stopped warming up, something told me we might have these guys!"

Reed lined up against Chamberlain for the opening tap and scored the Knicks' first two baskets of the game. Those would prove to be his only points, but his presence was more than enough to inspire the Knicks to a 113-99 victory and the franchise's first NBA Championship. Overshadowed by Reed's emotion-charged effort was one of the great playoff performances in NBA history by Frazier, who led the Knicks with 36 points and 19 assists.

I doubt that Alabama's defense would be psyched out enough by a limping Percy Harvin coming out of the tunnel, but anything is possible. For all the talk about Alabama having a great offensive line and a stellar defense, they've never come this far before. Many of Florida's regulars played in the 2006 SEC Championship Game. If Percy can rip off a 10-15 yard run early, that might be the spark. Only the guys on the team know how hurt Harvin is. A big run like that could be like Willis Reed's two jumpers and that could be it for Alabama.