Tim Tebow Has One More Game To Play

Share All sharing options for: Tim Tebow Has One More Game To Play 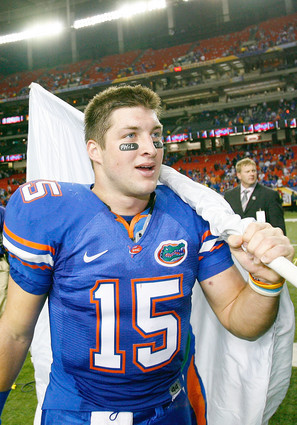 - No matter what happens Sunday with the bowl selections, Tim Tebow needs one more win to be the greatest Florida Gator and the namesake for thousands of babies born to Gator grads. What we saw Saturday was the greatest example of athletic leadership in modern times. The Heisman is just a statue. Let a random Big 12 Quarterback have it. I don't care and neither should you. But no college player has displayed the ability and character that Tebow has this season. When Tebow should have been breaking down, he was challenging Brandon Spikes and crashing the kickoff team's huddle. The 14 point rally in the fourth quarter was the best Tebow has played ever. This was the best defense he has faced and it was on the biggest stage. There were zero turnovers and Tebow's touchdown passes (Moore, Nelson, Cooper, not exactly a Murderer's Row) were passes that had to thread the needle, supposedly the passes a glorified fullback like Tebow can't throw.

- As we all know, Florida is a very proud program. But the talk for much of the week was how Florida was a steamroller heading to Miami. Urban is a master motovator though and the Gators felt they had something to prove;

Alabama's dominance and toughness would wear down Florida and produce a victory. The Gators? They had had to play four quarters only once this season. Florida had played one close game and lost it, 31-30, to Ole Miss on Sept. 27.

Let's just say all of that pregame talk didn't go unnoticed by the orange and blue.

"They heard that once or twice. They heard it this morning," Florida offensive coordinator Dan Mullen said of the Gators. "The coaches heard it. The line coaches. The strength coaches. You couldn't help but hear it. And certainly the players had a lot of pride in the game they were going to play. And they played it."

From the Orlando Sentinel;

Florida players seemed tired of hearing the same storylines. Harvin knows them by heart — 'Bama's tougher, they have NFL-caliber offensive lineman, Florida's defense is too small.

"We took offense to that," Harvin said. "You seen the outcome today."

"Our team is a tough team," sophomore corner Joe Haden said. "The only reason they look past our toughness is our speed. They said we were a speed team and they [Alabama] were a tough team. We're just as tough. We can still be pretty and fast and tough at the same time."

- Alabama played a tremendous game and though I hate his Bama bangs, John Parker Wilson played well. The interception was typical of the late game 'chuck-n-duck' every quarterback gets into. If there was one mistake that could have been avoided, it was the Jermaine Cunningham sack on 3rd down that led to the Gators' final touchdown. Cunningham stunted and came up the middle, the only rusher to break through on a four man rush. (This was the only sack of the game. Bama had one as well.) If Wilson sees him or gets away, maybe Bama can convert and start another drive. In the second half, Wilson was 6 of 13, with the pick and Bama was content with Glen Coffee running the ball. Once Bama fell behind late though, the game was over. Wilson and the Bama offense, despite the talents of Julio Jones, is not built for quick strike drives like UF is.

- The sideline warning penalty was total BS, but it was a blessing in disguise. It ran off more time and gave the Gators some breathing room to run a pass play. Although with Jeff Demps after the penalty and one of the Tebow runs inside the five, it's as if Meyer and Mullen are willing to waste a play to keep the defense honest. Remember, the three touchdowns were on third and goal and only Nelson's catch was a wide open reciever. But even that ball was put to where only Nelson would have a chance to catch it.

- Brandon Spikes was a man possessed, so much so his over persuits nearly cost the Gators a few plays. But he played well and even got a 15 yard penalty at the end for blocking Wilson during Joe Haden's INT return. If you watch the replay, Spikes realizes the play is coming to him and he looks up to see 14 in white coming at him. Of course his is going to smack Wilson. Also, Jim Tartt kneeing a Alabama defender on the ground when he dove at Mike Pouncey's knees was awesome.

- We'll be back later today with a Florida-Florida State basketball preview and we're live blogging the BCS Selection show with a few Michelob Lights, the Official Beer of Championship Mode. Keep checking back when we flip out over the Coaches' Poll this afternoon.