10:18- Well, kids, it's been fun. Thanks for joining us in the live blog and check back tomorrow as we begin our hatred of Oklahoma and announce the Second Annual Alligator Army College Bowl Pick'em. And now, an oldie from YouTube. Enjoy.

9:50- The one good thing about the Outback Bowl is the SEC girls who randomly show up in Tampa bars, in addition to the usual Tampa girls. However, the Big Ten girls cancel them out. This year it is Ol' Ball Coach vs. Iowa. Eeeesh.

9:46- Hey, a MagicJack commercial! Guess who is sponsoring the awful St. Petersburg Bowl? MagicJack! My goodness. This is like if there was the Life Alert Oakland Bowl. Oh and it's Memphis vs. South Florida at Tropicana Field. Maybe a punt will hit the catwalks.

9:38- Georgia in the Citrus Bowl with Michigan State. Hey, Dogs, do you think you can win a big game this season? Michigan State is dumber than Georgia Tech, so they should be easier to beat.

9:32- Herbie thinks the possibility of a split title will inspire Texas in the Fiesta Bowl. Sorry, but there is no way there is a split title this year.

9:27- I'm searching for Rece Davis' "study" that said Southern players wanted a playoff. I remember the story and I think it was a Sports Illustrated survey. The Derrick Brooks story sounds about right. In a Bowl system, players get stipends, tickets and goodie bags as payment. In a playoff, that might be up in the air with out sponsorships. Then again, how solvent is "The Rose Bowl Game Presented By Citi"?

9:19- Yes, great question Rece, are you staying for your senior season? Tebow is non-committal, but says a National Championship is not a factor. Holtz then asks would you leave if you're one of the top three linebackers in the draft. By the way, Arkansas is the only SEC state to think Tebow should not win the Heisman. Big deal. Arkansas is like half-SEC cousins anyway.

9:17- Tebow answers a question about the Heisman voting by saying he is going to pray about it. Seriously? This kid is unreal.

9:15- Tebow just called the FedEx BCS Championship Game, "The Granddaddy of them all." Suck it, Rose Bowl.

9:13- Tebow on the promise, "It was a whole 'nother intensity...it sounds cliche, but when you do that it makes a difference."

9:11- The International Bowl (in Toronto, eh) is Buffalo vs. UConn. Today the Bills played the Dolphins in Toronto. Can't Western New York catch a game in the United States?

9:07- Ok, so Carroll is on the playoff bandwagon too. He said as much on ESPN and after the UCLA game. Dr. Saturday does a much better job than I would of arguing for a playoff, even a four team one.

9:06- Now that Urban is in year four, USC is the program Florida should model. Say what you will about Pete Carroll, but they just keep winning. Maybe it's a weaker Pac-10, but winning is winning.

9:03- Of course I think UF is number one, but USC is like a NFL team. If they didn't keep crapping the bed in Pac-10 games, they'd roll people. In a four team playoff, I'd fear USC the most.

9:00- Pete Carroll and USC are very excited to be going to the Rose Bowl for the fifth time in six years.

8:58- That is garbage. Notre Dame is going to the Hawaii Bowl to play Hawaii. Not only do I hope the Haka scares the Irish fans, I want the Warriors to roll 60 on Charlie Weis. Perhaps Weis will be roasted over a flame with a apple in his mouth after the game.

8:53- By the way, I'm having another Bowl Pick-em with a prize. It should be Gators related again and very interesting. And by very interesting, I mean, "not alcohol related." Sorry.

8:50- Lou Holtz is reading my blog apparently. He just said what I said, just with more spit and in an old man voice. And throw TCU into my western super conference too.

8:47- I think I'm a bright guy (two degrees from UF bitches!), but can someone explain to me how to become a Super Conference? And would it be possible if the best of the Mountain West and WAC combined to make a football super conference with Hawaii, Utah, BYU, and Boise State at the top? And poor Boise gets the freaking Poinsettia Bowl. At least it's San Diego and not Boise in January.

8:45- Herbie is "tired" about the mid-majors being involved in the national title discussion. Um, Utah and Boise State have played major teams well. Don't let Ball State and Hawaii fool you.

8:43- Is it wrong I'm more excited about seeing the 1958 NFL Championship game in HD and color than I am about the Heisman presentation?

8:38- "I'm hoping people are bored talking to him," if Tebow wins the Heisman again. And in an Oh My God moment, Urban says the same thing happened to Troy Smith in that he was distracted from the BCS title game because of Heisman media requests. Great. Let Bradford win.

8:32- Urban on ESPN, Oklahoma is "uptempo...but we have not studied them yet." On Tebow's speech, "Tim did not change his game...a group of players made a decision nine weeks ago...every week has been real serious." Holy cow, Herbie asks about psychological warfare. Urban brings up some Lou Holtz advice, clearly aiming for the older demographic.

8:31- ESPN has stolen their set up from CNN politics coverage. I have expect Rece Davis to use a magic wall to go through the matchups.

8:28- I made this up in case UF didn't get the championship game, so here it is. 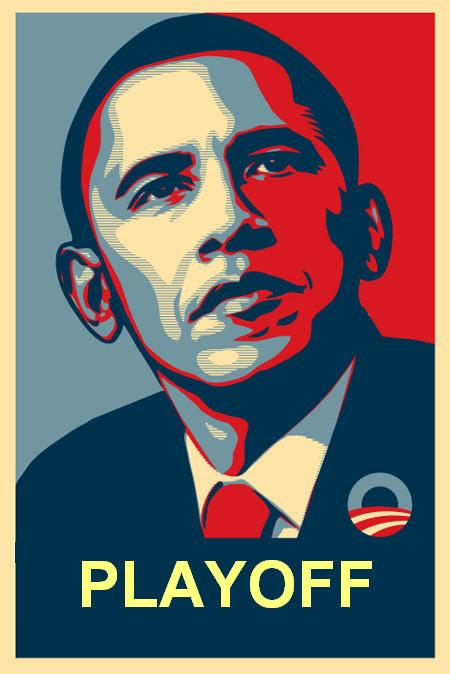 8:25- Wow, that was the nicest I've seen Urban in an interview. Hell, when Steve Babik talks to him on Gator Radio, it sounds like Urban wants to choke slam him and he sees Babik every day.

8:23- Jimmy Johnson asks Urban about Tebow saying he'd love to throw against a Big 12 offense. Urban has no idea what you're talking about Jimmy. So shut up and go get some hairspray.

8:21- The argument of one one-loss team over another is a losing argument. Stoops did a nice job of side stepping the question.

8:17- I know Fox wants to fill a half hour of programming, but the split title, with Texas getting a share, is longhorn shit. I don't doubt Texas is a good team, but if they have such a problem with this system, perhaps they can campaign for a playoff like the presidents of Florida (in 2006) and Georgia (in 2007) have. Hell, Mack Brown hosted Barack Obama during the Texas primary, and Barry wants a playoff too. But don't want a split title.

8:15- If there is a Football God, Alabama will barely beat Utah and Texas will crush Ohio State. Anything that keeps the glory of the SEC, while building up the mid-majors and crushing the Big 10 is good with me.

8:13- Utah is in the Sugar Bowl against Alabama, which will hopefully be an exciting game. And God Awful Ohio State gets Texas in the Fiesta Bowl. Which means it's Florida and Oklahoma in the title game.

8:10- Fox prepares us for the extended media timeouts in the BCS games by having back-to-back commercial segments. Or maybe this is time to prepare the Davis, Switzer, Johnson group for some anti-Florida propaganda. Folks, that's Tennessee, Oklahoma and Miami. None of those guys will give credit to UF. On the bright side, it's a 'Dark Knight' commercial!

8:05- The ACC has an 8 game losing streak in the BCS? Lovely. Maybe America's Mediocre Conference can win one finally. Also, my friend Tim has tix for the Orange Bowl along with tix to the BCS title game. I guarantee he doesn't get face value back for the Orange Bowl tix.

8:03- The Orange Bowl is Cincy and Va Tech. They show a live shot of Cincy's gym and kids chanting B-C-S. How cute. I think they are excited to get back-to-back games in Hawaii and Miami, forget the Big East title. Also, Cincy players are wearing leis from their Hawaii trip. Did these kids get a chance to sleep at all?

7:59- "Good for Joe Pa" is the intro by Chris Rose for the Penn State-USC Rose Bowl. I bet both these schools are excited about having no chance to play for a national title and upholding the tradition of the Rose Bowl instead.

7:57- We get started with the unholy alliance of Jimmy Johnson, Barry Switzer and Charles Davis. Seriously these guys suck. We begin the show by bad mouthing the mid-majors.