In a game hyped because of the Heisman winning quarterbacks on each side, it was Florida's defense that stole the show. Were it not for them, Tim Tebow's two first half interceptions would have been back breakers. Without them, Oklahoma scores twice after being inside the five instead of an interception and turnover on downs.

I don't know how it appeared on TV, but in person, Oklahoma's offense was fast. But Florida was able to keep up and make big plays when needed. At no point could you have said either team dominated, with the exception of Oklahoma's scoring drives. But aside from that, the Gators' secondary locked down Oklahoma. Carlos Dunlap may have won the Defensive MVP, but Ahmad Black, Joe Haden and Major Wright had a claim too.

Oklahoma locked down Florida too. Tebow never looked comfortable and Percy Harvin was not 100%. But his 90% was good enough for 174 yards on 14 touches and a TD. The Gators did dominate late, chewing off about 19 minutes of the final 30 and scoring 17 points. The vaunted EES-EEE-SEE speed became a grinding game, keeping Sam Bradford's eight second offense away from the ball.

Speaking of Bradford, he played well (26-41, 256 yds, 2 TD, 2 INT) but Oklahoma was 6-13 on third down, 0-2 on fourth, and 2-4 scoring in the red zone. Bradford did not come through when needed. Tebow, after an awful first half, did come through. When Tebow started running the ball hard in the second half, that snapped UF out of the funk they played the first half in. Where 15 goes, the team followed.

On a personal note, this was one of the greatest moments of my life. Being in Gainesville for the previous championships was huge, but seeing my team win was amazing. I was yelling so loud during Oklahoma's last drive I almost threw up and I'm still light headed. When Haden knocked down Bradford's final pass, I cried like a child. This season has been an emotional roller coaster and it all came out tonight, for the fans and players (even Tebow got an unsportsman like penalty).

Take some time to celebrate what this team has just done. There will be another day to worry about split National Championships, Oklahoma's dirty tackling and who is entering the NFL Draft. Florida is the first team to win two titles in the BCS era. Plus, by this weekend there will be another sign to hang on the stadium; 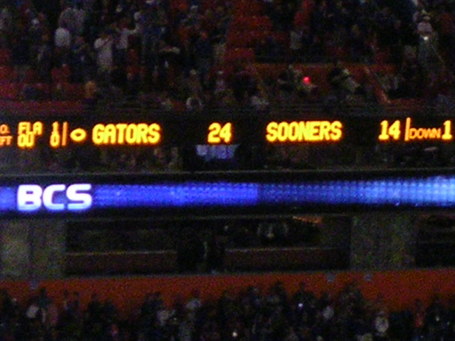