The Ghosts Of Mississippi State

Share All sharing options for: The Ghosts Of Mississippi State 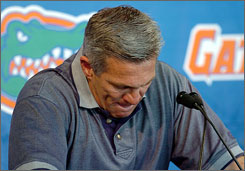 Ron Zook after Jeremy Foley had enough of losing to bad teams. Also, Ghosts of Mississippi is about the assassination of Medgar Evers. Mississippi Burning is about the murder of three young civil rights workers during the 1964 'Freedom Summer'. There will be a test later.

In 2004, Ron Zook had already built the platform and slipped his head in the noose, waiting for Sylvester Croom and Jeremy Foley to drop the door and end Zook's attempted murder of a proud football program. While the reports of Zook's demise came out on Monday, Foley and UF President Bernie Machen had ordered the execution Saturday night when Foley returned to Gainesville after Florida's 38-31 loss to Mississippi State.

The weekend was typical of the Zook Era. The Gators were outworked by a less talented team, allowing Miss State 251 yards rushing and to convert 9 of 16 third-downs. Florida was behind early and never led at any point of the game. If you went out that night in Gainesville, and saw any of the 30-40 football players that converged on the Midtown bars, you'd think the Gators won. The way Florida played in Starkville, plus the players' lack of focus, and Zook's attempts to intimidate a fraternity, all led to Zook being sent away. (That's how bad of a coach Zook was; a fraternity was getting sympathy in a fight with the football team.) Not surprisingly, the players were against the firing, because Zook was an enabler for a group that never lived up to their potential.

Ron Zook's final attempt to destroy the Florida Gators was not the only stumble by UF in Starkville. The Gators are 0-4 at Mississippi State since 1985, including two losses by Steve Spurrier (1992, 2000). All time, Mississippi State is 7-3 in Starkville, while Florida leads all time 32-18-2 and 6-4 at Jackson, Mississippi. That Florida has not dominated on the road in the series is a fluke. You'd expect Florida to be under .500 at Alabama or Auburn, not Mississippi State. Urban Meyer needs to keep his head on a swivel to avoid black cats, jinxes, and Dan Mullen embarassing Steve Addazio. Otherwise, Florida will again lose at Starkville. But at least Urban has some job security if they lose.