Game 8 vs. Georgia: Trick Or Treat

Share All sharing options for: Game 8 vs. Georgia: Trick Or Treat 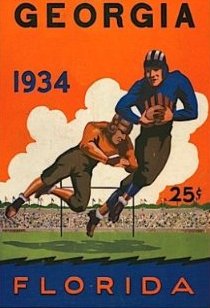 The last several years of this rivalry have been about ruining the other guy's season. In 2007 (the Celebration Game), No. 9 Florida lost, the end of a stretch when UF lost 3 of 4 games. In 2005 and 2003, a No. 4 Georgia team lost by less than a touchdown, with the 2005 loss ending dreams of a National Championship. An undefeated No. 5 Georgia team also lost in 2002, when UF was unranked and Ron Zook was seeing how far he could stick his finger up his nose.

It would seem Florida has a lot more to lose than UGA to gain today. But a Georgia win would be another psychological blow in a rivalry that is played increasingly between the ears. The Dogs have a shot at winning 3 of the last 6, which seems like no big deal until you realize that hasn't happened for UGA since the late 1980s. 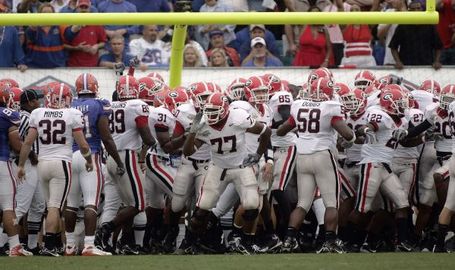 But Urban Meyer has a doctorate in mind games and Tim Tebow is working on his Masters. They are both, in the kindest sense, Goddamn monsters. Tebow has willed this team to nearly every win this season with Meyer insulating the team from any attack, real or imagined. If there was going to be a Eff You game this season, like last season, it would be today. And for the sake of the Gators' National Championship hopes, I hope it is today.

We should be posting a game recap, but if leaving the game is total chaos, check out our twitter for updates. And of course, we are in Championship Mode.