Share All sharing options for: An "Exclusive Interview" With Evil Tim Tebow 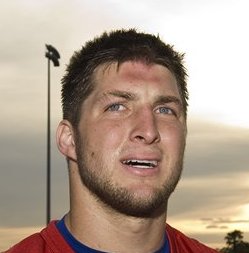 While we were in Gainesville last week, we had an opportunity to meet with Evil Tim Tebow in his office in the back of Lillian's. Here is that interview;

We're sitting at a small circular table in a storage room at Lillian's. Tebow is wearing a smart looking gray suit with a white shirt, unbuttoned at the top. He has a glass, a bottle of liquor, and a Blackberry on the table. He leans back in his chair.

Alligator Army: Tim, thanks for meeting with us.

Evil Tim Tebow: No problem. It was a slow day today, I had time. pours himself a glass of Bushmills

AA: I think the question people want answered the most is why you have not had as many opportunities as last season?

ETT: First of all, I don't really care what people think. I care what my teammates and family think. Are these the same people who bitch and moan about how we don't have the offense we had last season?

ETT: Those people need to understand that this is a different team. Not just because we don't have Mullen or Percy. We're a running team. Our running backs are a lot better than our receivers.

AA: That still doesn't explain why we haven't seen you play.

AA: Off topic for a minute. You're Tim and the sort of Good Tebow is Timmy?

ETT: Yeah. I hate being called Timmy. Although I like Good and Evil Tebow. I should use that.

AA: Go ahead. Now, some of your most memorable games have been against FSU. 07's win got you the Heisman, 08 was a massacre after they cheered Percy's injury. Does this game still mean a lot, or is the bigger concern Alabama?

ETT: takes a long swing of Bushmills You play the team in front of you, so I'm worried about FSU, not Alabama. That said, I hate FSU. I've hated them my whole life. It's not just football either. When I first got to Nease, we had a kid on defense who liked to talk a lot and who had a Dad that played at FSU. So he starts yelling at me.

ETT: I'm not done with the story, ass.

ETT: Evil Tebow leans forward But he goes too far. He starts talking about my family and our ministry. Someone told him about the orphanage, so it was the usual shit about abusing kids or something. So, after practice, we do Bull In The Ring and he's in. Coach calls out five, but at that time, I wasn't yet number five yet. The kid who is five runs in, and I come from the side and low.

AA: Take out his knees.

ETT: Hell yes I took out his knees. This guy is rolling on the ground and crying. Boofuckinghoo. I get up and I'm like, "My bad." And no one wants to go after me, because you know, I'd kill them. The kid ripped all his knee ligaments and I think he chipped a kneecap too. Never played again.

AA: He was that injured?

ETT: Relax, pussy. He can still walk. sips Bushmills, finishing the glass Well, he can sort of walk. laughs and refills his glass

AA: I don't understand how that can be why you hate FSU.

AA: Do you think people are surprised that there are two sides of Tebow?

ETT: They shouldn't be. sips on his Bushmills

AA: But you're the good kid.

ETT: laughs Oh, really? You don't know who my roommates are?

ETT: laughs harder Very good. You think a good little Christian boy could live with Tony Joiner? Or Riley Cooper? Coop punched through a car window! I'm not saying those guys are criminals or something, but do you think it was Timmy living with them? Or that Timmy was the reason Brandon came back? Come on. drinks more Bushmills

AA: Yeah, I though about you after the Georgia game, when Timmy defended Spikes by saying that UF wasn't doing anything Georgia didn't do.

ETT: Well, that was me. I love jumping in those press conferences and making those fat boys from the recruiting sites squirm.

AA: I've already taken a lot of your time, but I wanted to ask if you ever try to choose a random Bible verse for your eye black.

ETT: Oh yeah, that's a good one. He stabs the king so hard, shit falls out. leans back We'll see. Plus, apparently people are going to wear eye black with Bible passages. I'm sure Timmy will pick something safe like he did in the Oklahoma game.

AA: What do you think about that? The eye black thing?

ETT: Look, it's Senior Day, not Timmy Tebow Day. leans towards the table

AA: Yeah, but you know you're the star, people want to honor you.

ETT: But I already told you I don't care what people think and I don't care what they do. Timmy does, not me. You know, I see t-shirts with my number on them or that stupid I-Heart-T-Bowtie. They're making money off me. You want to support me? Use your ten bucks you spend on eye black and a silver sharpie and donate it. You've heard about the violence in the Philippines? Almost 60 people dead. And more people will probably be killed too. Guess where our orphanage is? On the same island. Why not donate to the orphanage, instead of buying eye black? Or donate to Danny Wuerffel's Desire Street Ministries? Evil Tebow finishes his second glass of Bushmills

AA: Well, do you have anything else you'd like to add?

ETT: Look, we have three games left for an undefeated season. I say that I don't care about other people, but I do care about our fans. On Saturday here and in Atlanta and hopefully in Pasadena, our fans need to dominate. If you expect us to destroy people, we need your help. And the students should stand up the whole game. We're not fucking Miami.

AA: Tim, thanks for joining us.