Final Thoughts On FSU Before Alabama

Share All sharing options for: Final Thoughts On FSU Before Alabama

Just getting these out of the way...

- I don't know how this came across on TV, but part of the reason why the Senior Day ceremonies were so emotional was that they started with Michael Guilford, who died in a motorcycle accident during the 2007 season. For all the talk about how this was the most successful class in SEC history, they were missing a brother Saturday. If you were already feeling it, like Urban Meyer clearly was, the introduction of Guilford's parents was an early start to the waterworks.

- Brandon Spikes' introduction might have been comic relief in that it was the most demonstrative (kneeling, kissing the turf), but if Ben Hill Griffin Stadium is Holy Ground to you, it was perfect. And it led to this picture; 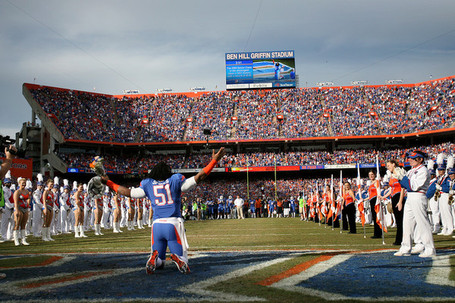 Spikes may wear the Black Hat in every other college town, but he can do no wrong in Gainesville. When he speaks about what this team and university mean to him, as he did postgame, you can understand what this all really means. Spikes is just one example, but there are millions of kids from rough neighborhoods and broken homes who play sports as a means to get an education. It just so happens that Spikes expressed his gratitude in such a public display that I hope endears him to all Gators, including the ones not willing to defend him this season.

- From The Paper of Record;

Like fishing stories told on front porches at dusk or tall tales traded around bar stools after last call, the legend of Tim Tebow seems likely to only grow larger in this part of the country. As the years pass and the tales are spun and re-spun, Tebow’s accomplishments will take on an almost mystical quality. The Florida faithful — a record 90,907 of them — flocked here on Saturday for a flesh-and-blood sendoff that felt part like a graduation, part like a funeral. They left with more tall tales to tell.

I know I thought it was a graduation; we are sending our boys to Atlanta and hopefully Pasadena. My friend Timmy C thought it seemed like a funeral; our boys are gone for good. Either way, years from now, thousands more will claim they were in the building for Tebow's last home game. It will seem like 900,000 were there.

- Since I've become an angry old man this season, I've called out the student section for being soft and/or spoiled. I still maintain they were spoiled (which is bull because I'm class of 2006 and even got to cover the 2006 Gator Basketball team, so I'm spoiled too). And when you're spoiled, you can become soft. Yes, the kids did breakout a beachball in the first half, but they stayed loud and saw the team off. This is a picture I took showing the students after the game ended and before the sing-along. This is the most packed I have seen the student side at the end of the game. No one left until Tebow left. 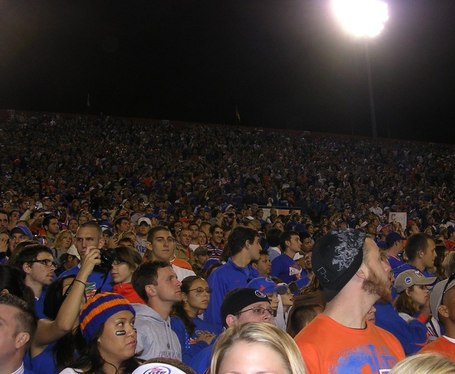 Also, while the lack of a "U-F RE-JECTS!" chant was a disappointment, this is the first class of students to truly think of FSU as second class. Just as we grew up not hating Georgia because Florida always beats them, current students have never lost to FSU. Not only that, they are so much smarter in that FSU students are not their peers. When I was accepted in 2002, it seemed like the difference between UF and FSU was a few A's and B's and about 200 SAT points. Now, I wouldn't get into UF but I'm too smart for FSU. Ripping on FSU now is like kicking a dead horse that's been run over a few times.

- Speaking of FSU, the humane thing is to have Bobby Bowden retire. I understand that he wants to hang around, but he's like Kim Jong-il in North Korea, down to the previously picked successor, mildly interesting interaction with important leaders, and hero worship (to be fair, Kim only has a statue; Bowden has a window too).

- When the flashbulbs were popping in anticipation of Tebow's final touchdown, I tried to take a picture to capture the huge amount of flashblubs (it was enough to create a strobe effect). The Orlando Sentinel tried the same thing and it actually worked. 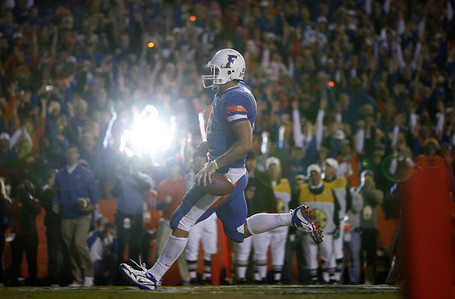