Awwwww, hell yeah boyeeeee! It's the 3rd Annual Alligator Army College Bowl Pick'em! Wooooo! Once again, we will have prizes for our first and second place finishers. To sign up to play, go to Yahoo College Bowl Pick'em join a private group, and enter group ID: 18183 and password: army . As was the case with last year's bowl pick'em, points are determined by confidence points attached to each pick. It does not matter if every one picks Florida in the Sugar Bowl; it does matter how confident you are in the Gators winning.

First price for the bowl pick'em is contributed by Turner Publishing's Historic Photos of University of Florida Football. 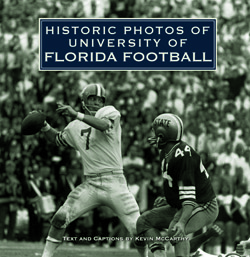 Second prize is a Florida Gators car magnet contributed by Armagnets. This was the first prize of our Tournament Pick'em in March, but we know the person who won the magnet last time, and she wouldn't mind a new one. 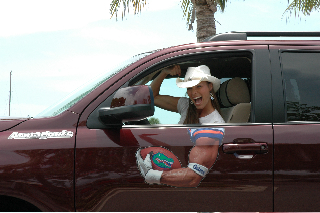 Note: Tournament pick'em winner not pictured. Just a chick and the magnet.

You have this week to sign up as bowl games begin Saturday with the Beef O'Brady's Bowl (the winning coach will get dumped with Blue Cheese) and the New Mexico Bowl (which should be the UFO Bowl or Enchantment Bowl). As always, thanks to the companies who have contributed prizes and to everyone who plays.