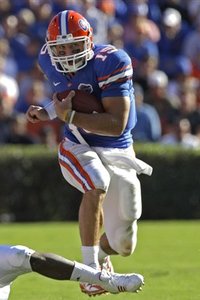 Tim Tebow, Senior, Florida (six votes): The most memorable images of Tim Tebow this season might be him lying motionless on a field in Kentucky and being unable to control his emotions in Atlanta. In between, it was 2007 again for Tebow as he was the steady hand at the wheel.  Tebow had 2413 yards passing and 18 touchdowns through the air. His 859 yards rushing were almost as much as a result of scrambling as they were designed plays. His 31 total touchdowns were more than necessary as Florida struggled to find two solid wide receivers and offensive tackles. Just as it was as a sophomore, Tebow was the first and last options for Florida. Whatever you think of Tebow, there will not just be a void left in Gainesville after Number 15 leaves; it will be across college football. 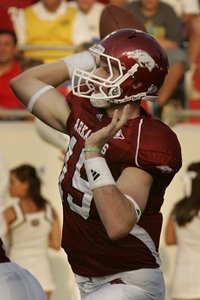 Ryan Mallett, Sophomore, Arkansas (five votes): Yes, Mallett is from Texarkana, so maybe Razorback fans had faith in the Michigan transfer that had come home. But Mallett's pinball numbers in Bobby Petrino's offense confirms that faith and makes the rest of the SEC think that Arky's rebuilding might be quicker than first thought. Mallett's 29 touchdowns (fifth nationally) led Arkansas to top-ten national finishes in scoring and passing offense. On a better team, Mallett might have been the top giant killer this season too; the Hogs were field goals away from defeating Florida and LSU on the road. In those two games, Mallett was 29-66, 451 yards, 2 touchdowns and 1 interception.  It seems pedestrian, until you remember that this was the first year of Mallett in Petrino's system and he had 3422 yards this season. All signs point to Mallett being a force in the SEC. 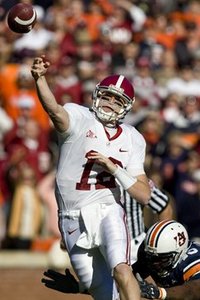 Greg McElroy, Junior, Alabama (one vote): There was a point this season when people wondered if McElroy had the ability to lead Alabama back to the SEC Championship Game. That was before rallying the Tide against Auburn, throwing the winning touchdown to complete a 15-play, seven minute drive, as his Heisman winning running back sat on the bench in pain. If that wasn't enough, a week later, the mighty Gators couldn't stop McElroy from scrambling or hitting guys 15 yards upfield. Tebow might be more demonstrative and Mallett might be a freak of nature, but McElroy wins ballgames. He has won his last 29 games as a starter, going back to high school. He has the least touchdowns of the top-two vote getters (18 total to Mallett and Tebow's 31), but McElroy isn't asked to do as much as those two. The only numbers that matter to McElroy are 14 and 0.