Our nominees for the Gators' All-Decade basketball player are the Oh Fours and their honorary member. Some of you may think we should have included David Lee, Matt Walsh, Anthony Roberson or Nick Calathes. And to you I ask; how many National Championships did those guys win? (To be fair, Walsh and Roberson leaving school benefitted UF, so I guess that might be a sign of their greatness.) On to the nominees; 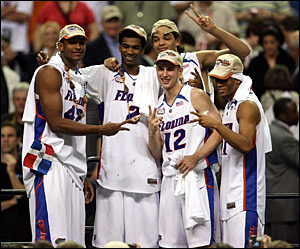 Corey Brewer, Forward, 2004-07: At 6-foot-9, he could handle the ball like a guard and play defense like a big man. Had the most to gain personally if he left after his sophomore season, but he held off the riches of the NBA for another title. Most Outstanding Player of the 2007 Final Four.  Career Numbers: 11.3 ppg in 108 games (averaged about 14 points in 2006 and 2007 NCAA Tournaments), .479 shooting percentage, .356 three-point percentage.

Taurean Green, Guard, 2004-07: After not starting as a freshman, Green started every game of his sophomore and junior seasons. Ran the Gator offense and was never a shoot-first guard. One of a few guards who could contribute, without shooting jumpers. Career Numbers: 10.5 ppg in 111 games (averaged about 12 points in 2006 and 2007 NCAA Tournaments),.401 shooting percentage, .389 three-point percentage.