--- Imagine having a 24 hour a day job. Your competitors are just as good as you, or at least that is what you think. You can never do enough to beat them and there is always more work to be done. Your work consumes you and your family. The hopes and dreams of little boys and rich lawyers who wish they were still little boys, are carried on your back. You are also responsible for about 100 18-22 year olds in a city that can eat them alive. Urban Meyer is nothing more than a football coach. He is not a general or a firefighter or a doctor. All he is asked to do is win football games. But, just winning is not enough. He knows that and we know that. When you've spent nearly your entire adult life trying to win football games, there comes a breaking point. For Urban, that was December 6, when he took a trip to Shands Hospital, unconscious and experiencing chest pains. That night was the culmination of a year marked by illness, crushing stress and a sign that his body had enough. The mind might be willing, but the body is not able.

--- My favorite Meyer story comes from my friend Hanson. He was covering practice in 2006 when Urban came off the field clearly agitated. No one wanted to ask the first question. After about 15 seconds, Hanson sticks his WRUF mic in.
"So, uh, coach, how was practice?"
Urban glares at him. "How was practice? How. Was. Practice." Urban keeps glaring. Finally someone breaks the tension and asks a different question.
Later that week, Hanson has finished the presser and is walking back to Weimer Hall. In front of the O'Connell Center, he feels an arm draped around his shoulders. It's Urban. He smiles at Hanson and pats him on the shoulder, before walking away.

--- Meyer cannot do anything at half speed. If there is a weakness to him, it is this. There is no off position and that is what led to Saturday night and the End of An Era. When a grown man cannot go home and just worry about his family, the job is too much. When that same job makes your head throb in pain and your chest feel like it will burst, it is far too much. All of us have some level of anger about Meyer leaving and that is normal. I'm sure Meyer has a similar feeling. But, the sophisticated among us knew this day would come. We wanted more and more and Meyer was willing to give until it impacted more than just him. For Meyer's sake, he gets to leave on his terms. We should all be so lucky.

--- Urban attended graduation ceremonies when his players graduated. Even in a time of celebration, Urban had trouble turning off his sideline demeanor. One of Hanson's friends was taking grad pictures on Florida Field when Urban walked past them. He stuck out his hand and said, "Hey, Coach!" Urban did not flinch and kept walking. "Come on, Urban, it's just a hand shake!" Urban was startled and turned around. He walked back. "Oh, sorry. Congratulations." Urban shook the kid's hand enough for a picture and kept walking off the field, ignoring handshakes and flashbulbs the whole way. 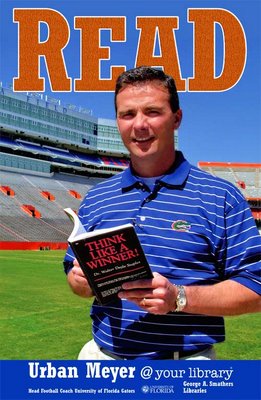 Urban Meyer, promoting the Smathers Libaries, 2005.
--- Meyer's initial statements and reporting indicate that Meyer will stay in Gainesville, as his youngest daughter is in high school and his son is in middle school. The kids have been moved around their whole lives and it's not surprising that even as Meyer steps down, he is tying himself to Hogtown. He is also apparently maintaining a connection to the university. Maybe he becomes a fundraiser, and secures millions for UF's academic programs and not the University Athletic Association. Maybe he becomes an instructor, and provides an easy two credit class for college kids who schedule him as a break from the rigors of Man's Food, Age of The Dinosaurs and Math for Liberal Arts Majors (all of those are real classes, but classes for people who don't want to ever graduate). No matter what he does, as long as Meyer is in Gainesville, he is still the city's Alpha Male.
--- As the Alpha Male, how far does his voice go in selecting a new coach? Does he campaign for his former right-hand man, Dan Mullen? What about old friend Charlie Strong? Is Meyer ignored and possibly cut off for putting UF in this position? The politics between Meyer and athletic director Jeremy Foley could impact this team for another five years.
--- Depending on the day, you could see Urban on campus. My interactions with him were never personal. I was another kid sticking a mic or camera in his face, asking open ended questions for a 30 second bite. But as a senior in spring of 2006, I was walking past the stadium and Urban coming towards me following practice. Like anyone else, I looked at him, but tried to act cool. Urban noticed and did a head bob to acknowledge me. I replied the same way. The man was cool. Even if he always wore that stupid long sleeved white t-shirt.

--- From the St. Petersburg Times;

Florida cornerback Joe Haden was running past Urban Meyer after the Gators' practice Saturday afternoon, when he heard his head coach yell out to him: "Joe, I love you. I want you to know I love you." A startled Haden responded, "I love you too, coach." Despite their extremely close relationship, he couldn't help but find the interaction odd at that particular moment. A short time later, he understood it very clearly. 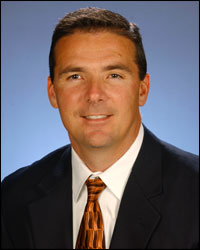 Urban Meyer in 2004, when he was announced as Gators Head Coach.

--- Meyer never said he would be coaching for a long time. UF President Bernie Machen, who hired Meyer when he was president of Utah, predicted last season that Meyer would retire as a burned out man, not jump to another gig. It's possible that Meyer coaches again. With that in mind, it is Florida's responsibility to structure a new contract for Meyer The Advisor that includes some sort of buyout or non-compete clause. In terms of his relationship to Florida, Meyer is saying the right things, telling the New York Times that he will always be a Gator. But circumstances change. If his son decides to play football somewhere, maybe Meyer follows him? And if Meyer remains in Gainesville, isn't he always on speed dial if UF needs a new coach? I think he will come back at some point. Just not until his kids are grown.

--- The average student now spends about five years in Gainesville. Not because UF is hard to get through, but because you don't want to leave Gainesville. I know people who could have graduated in May graduate in December for another season of Gator Football. More students are going to grad school, with the added bonus of first choice of season tickets. Gainesville isn't any better than other college town and it has as much problems as any Florida city. It does become a part of you. That's why I smile at the idea that Urban Meyer is leaving Florida after five years, only to hang around town.  Like a lot of grads, he doesn't know what he is doing next either.

--- When Meyer came to Florida, we needed someone who would be a professional. Yet, when this video was passed around campus, it seemed totally normal. You'll have to excuse the Coldplay music, but in spring of 2005, every Gator fan was sort of emo.

Between this video and this one of the 2005 Fiesta Bowl, we thought Urban Meyer was going to be the Savior. I don't know if that is true, but the man got us two National Championships and two SEC Championships. And he recruited the most important player in Florida history. 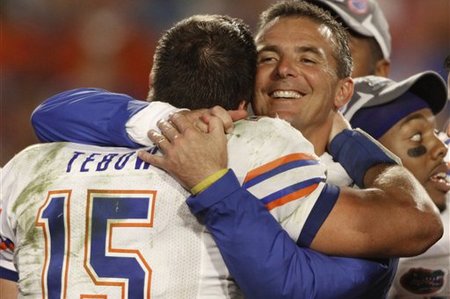