Your Alligator Army Basketball Player Of The Decade Is...

Share All sharing options for: Your Alligator Army Basketball Player Of The Decade Is... 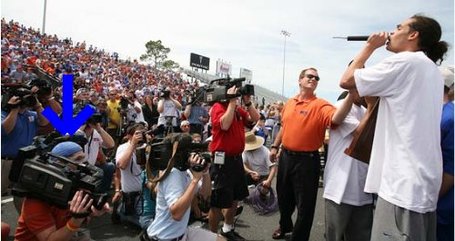 Joakim Noah at the Gainesville Raceway following the 2006 National Championship. The author is kindly pointed out for you.

The vote was tied with Noah and Al Horford each receiving 39 votes (Corey Brewer was next with 29). The tie was broken by my little sister, who makes it 40 votes for Noah. For the record, I voted for Brewer. The last time a family member had this much impact on a vote was when my Grandmother miscounted the ballots for the New York Daily News' Yankees 50th Anniversary team, and Bill Dickey was selected over Yogi Berra as best catcher. Yogi never talked to our family after that.