Draft Day Devil's Advocate: Ingram Will Be A Better Pro Than Harvin

Share All sharing options for: Draft Day Devil's Advocate: Ingram Will Be A Better Pro Than Harvin

Welcome back to the Devil's Advocate, where I take a position opposite most of our readership. Previously, I made the case that Lane Kiffin is bad for UF and that there will never be a college football playoff. Today, we look at two Gators in the NFL Draft.

The greatest athletes in the world are not football players or boxers. They don't compete in the decathlon or triathlons. They are thoroughbred horses, the only athletes that are expected to be in peak physical condition at age 3. While you and I are just learning how to not crap in our big boy pants, thoroughbred horses are running in the Kentucky Derby and in Dubai for Middle East royalty. At a racetrack, there are usually two schools of thought; do you like the sprinter, who might break down but could win the Triple Crown like Kentucky Derby and Preakness winner Big Brown? Or do you value the endurance horse, who wins on guts and strength like two-time Horse of The Year, Curlin?

Florida's thoroughbreds, Percy Harvin and Cornelius Ingram fit both descriptions. Harvin got to where he is on God-given talent, but has enough nagging injuries and personality issues to scare people off. Ingram has God-given talent too, but where Harvin is loved for his highlight reel, Ingram will out work you. Look at this picture of Ingram, via the Orlando Sentinel and Muscle & Fitness. Have you ever seen someone so jacked? My God, it looks like a GI Joe man wearing armor plating! 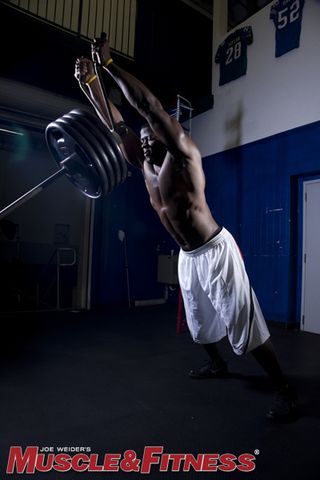 Ingram's history speaks of a man who has blown up every barrier put in front of him. Signed out of Hawthorne for basketball and football by Ron Zook, CI dropped basketball to focus on football full time. When Urban Meyer came on, Ingram was a typical Zook recruit; freakish athlete who wasn't trying in school. Then Ingram started looking at transferring, realizing he would never be Gators' QB like he was in Hawthorne. But, CI stayed on, became a student and tight end. He stayed in Gainesville for a senior season to graduate and win another championship. HIs knee injury in training camp may scare teams off at some point, but his growth as a player and a man is more significant. CI had to do a lot of things the hard way, and it will pay off with a spot in the NFL.

I'm not knocking Harvin and I believe his 171 total yards and touchdown against Oklahoma is the greatest individual performance in Gator history (Tebow vs. Alabama is #2). But, Harvin's package includes the personality issues like not taking practice seriously and testing positive for weed before the draft. Harvin believes his talent overrides his flaws, which is true. In the NFL however, those flaws are magnified. Not working in practice might be tolerated by Meyer, who knows what buttons to push and when. It won't be tolerated by a career assistant who wants to breakdown a rookie receiver. Plus, Harvin's body type (5-11, 192) makes him about average and he's got the problem of not being a typical WR or RB, and NFL teams are not creative enough to use a tweener-guy (see Bush, Reggie). CI is a monster at 6-4, 245 and can run well enough to be a tight end. CI can also destroy a corner, and with some quickness, could be split wide.

In 7-10 years, Harvin may have more highlight plays, but it will be Ingram who will have had the longer and more productive career.