Share All sharing options for: Random Thoughts On Michigan State-UNC

- Since the creation of the BCS in 1998, the Big Ten is 2-6 in basketball and football championship games. Can you name the winners and years they did it?

- Michigan State ran into one of the best college teams this decade they had to do it after defeating two other No. 1 seeds. (Only 1997 Arizona has defeated three No. 1 seeds.) Michigan State is a great team with good players. North Carolina is a great team with great players. But, even removing my homerism, UNC is second to 2007 Florida in terms of the best teams of the decade. While both teams defeated a team in the finals they had defeated in the regular season, 2007 Ohio State is far better than Michigan State. Florida was also trying to do something never done before; the same starting five repeating as champions. Both UF and UNC have NBA-ready talent, but I'd take Green-Humphrey-Brewer-Noah-Horford over Lawson-Ellington-Green-Thompson-Hansbrough. UNC's guards are fantastic, but Florida's front three would dominate.

- Speaking of Hansborough, if you love Tim Tebow, you cannot hate Hansbrough. I think the kid looks like a doofus, but Hansbrough is a great player. He's hated for that; looking like a doofus and being a great player. Change out doofus for religious, and you have why people hate Tebow. While Tebow is a bigger winner, Hansbrough is playing under a bigger microscope and more history. The legacy pre-Tebow is Steve Spurrier and Danny Wuerffel. That's it. Hell, people barely know Emmitt Smith was at UF. Hansbrough is following Jordan, Big Game James, Dean Smith, Larry Brown, Bob McAdoo and Sam Perkins. Not to mention UNC's 2005 championship team. You cannot compare the pressure on Tebow vs. Hansbrough. Tebow's been more successful, but don't underestimate Hansbrough because he looks funny and talks like he never attended a day of classes in Chapel Hill.

- If I may say something about baseball, I know Derek Jeter. Derek Jeter is a friend of mine. And that is no Derek Jeter. Seriously. He has no range anymore. He had trouble throwing out Gregg Zaun today. He's making the last years of Cal Ripken look good, and Ripken sucked. Although, there wasn't much Jeter could do to make the Yanks' 300 pound waste of cash pitch well. Rays-Red Sox today will be the ALCS preview.

- Finally, the winner of the Florida Gators Armagnet is "HeightsGirl's Bracketology", with 132 points. She edges out "I am Tebow!", who gets The Presidents' Trophy with one more win but one less point. Just like the College Bowl Pick'em, the winner is from the Tampa area. City of Champions, bitches. 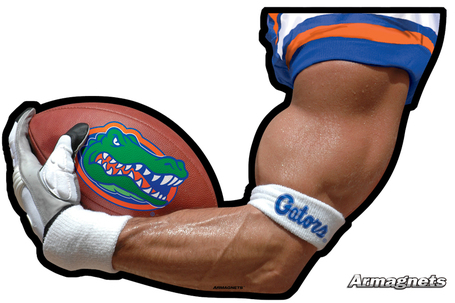 Alligator Army would like to thank Armagnets for their sponsorship and encourages you to visit them for easily the most creative way to decorate your car with Gator gear. If you'd like to contribute your product for future contests, email us at alligatorarmy@gmail.com. The plan is for a weekly Alligator Army College Football Pick'em, which we had this year, but no prize for.