The Road To Pasadena: Wright-Hill-Black

Share All sharing options for: The Road To Pasadena: Wright-Hill-Black

Our look at the men who need to lead the Gators to the BCS National Championship Game begins with the three-headed monster in the Gators defensive backfield; sophomore Will Hill, juniors Ahmad Black and The Major Wright. 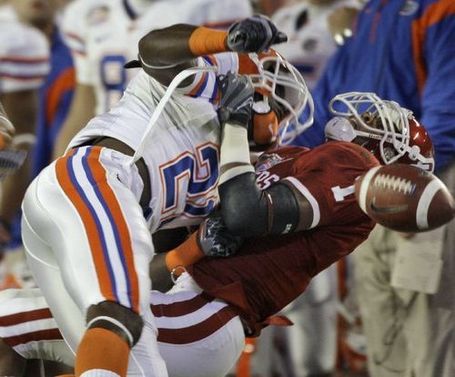 In the greatest performance ever by a Gator defense, it was Wright's hit and Black's game-saving interception against Oklahoma that will forever stand out in the minds of Florida fans. Yet, neither is guaranteed of their starting job as 2009 begins. The emergence of Hill in fall camp has put Wright on notice, while Dorian Munroe had been breathing down Black's neck until Munroe's injury. Florida's wealth will ultimately put at least one of these game changers on the bench.

Black went from playing in four games as a freshman to being tied with the national lead in interceptions with seven. That type of growth can induce pain as well, as Urban Meyer's cryptic line about Black's non-football issues can make you wonder where the junior's head is at. Black has the ability to repeat his 2008 campaign, but the second year is harder since he is no longer a surprise. If Black wants to continue being a ball-hawking DB, he has to be able to perform as a star.

If you remember when Will Hill declared he would go to Florida, it seemed as if Florida had their torch carrier following Reggie Nelson. But after being used as a typical freshman; 2 picks, 29 tackles, 19 assists in 13 games, Hill has shown the talent that made him so highly recruited as a high school senior. With The Major out due to a concussion, Hill has filled the void, with teammates calling him the best defender in camp.

Wright's hit against Manny Johnson may have set the tone in the Oklahoma game, but it was his interception shortly before halftime that kept the game 7-7. Had Oklahoma taken a 14-7 lead, who knows what would have happened in the second half? But you can't live on one game, which is why The Major has been pushed to improve. Wright understands this;

"There's always room for me to get better,'' Wright said. "I just try to work on everything that people critique me on. I do more to get better."

Like with Black, Wright can't assume automatic improvement. His awareness that being a head hunter can backfire is good, as it is impossible to expect corners Joe Haden and Janoris Jenkins will be able to lock down everyone. As good as Haden and Jenkins are, they are not All-Americans, while Wright, Hill and Black have that extra level that puts them at the top of the class. If Florida's line struggles to get in the backfield, the secondary will have to lead, and it is this triumvirate that will do it.