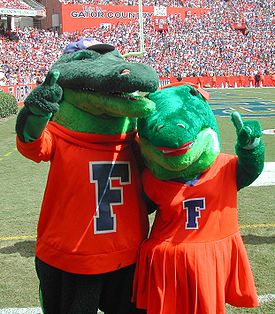 Albert and Alberta are always glad to see you.

Our last football trip to Gainesville was for the South Carolina game. While I got to see FSU and Oklahoma last year, a game in The Swamp for me is like attending Mass at St. Peter's, and I say that as a practicing Roman Catholic. But coming along Saturday is Hanson, who hasn't seen a game in Gainesville since 2006. In addition, it seems like everyone and their mother will be in Gainesville this weekend. Partly, it is because Lane Kiffin decided to make this a publicity stunt for his team. But mostly it is because this is hopefully the first big win of the season. If Florida wins another National Championship this season, we can all say we were there when it started. See you tomorrow.