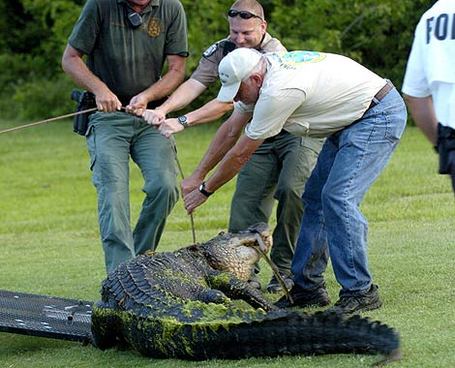 No alligator! Get away! Get away before they spoil your season!

There is no bad blood on either side this week. The opponents have underrated offensive weapons. And the last time a No. 1 played Florida's opponent this week, No. 1 lost.

Today's game against Kentucky has all the makings of a trap game and that's not including the Gators coming down with the swine. UK has Randall Cobb, the SEC leader in catches per game (6.5). They also have Derrick Locke, the conference leader in all-purpose yards per game (185.5). QB Mike Hartline is good enough to win, should Florida decide to just go through the motions and hope to get to the bye week without bumps, bruises or a sore throat and fever. Florida has to take this game very seriously.

By the way, Alligator Army will be attending the USF-FSU game, since we'll be living in Tallahassee for at least two more weeks. I'll be rooting for my Tampa brothers from USF. But, Jesus Christ could play for FSU and I wouldn't root for them.

[10am UPDATE] The Independent Florida Alligator reported overnight that Tim Tebow and Major Wright are suffering from flu-like symptoms and traveled separately from the team. Tebow isn't the first notable guy to get the flu as Colt McCoy played with it last week. However, if Tebow has to be removed, at least we get to see Johnny Brantley and his beautiful throwing motion.