Share All sharing options for: Game 14 vs. Cincinnati: The 2010 Sugar Bowl 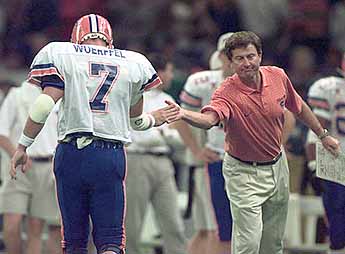 "What are you gonna do Danny?" It was a simple question by Steve Spurrier to Danny Wuerffel before the 1997 Sugar Bowl. It wasn't so much the question, but the tone. Wuerffel was not a guy that needed to be inspired, but coaches know when to push an extra button and who has that extra button available.

Tonight, the Gators need to push that extra button against Cincinnati. The Bearcats come in undefeated but disrespected. They feel they are playing for a National Championship, yet are 13 point underdogs. A team of castoffs and guys who weren't good enough to play at the traditional powerhouses, now includes the inspiration of their coach abandoning them. It's just another chip on the shoulder that is stacked with them.

With the exception of WR Mardy Gilyard, there isn't anyone on Cincy that should scare Florida. But as a team, they are scary. They are serviceable as a defense, but have made plays when it mattered most. They are 49th in total defense, but 20th in scoring defense; a sign of a bend-don't-break defense. I don't know if you've seen Florida this year, but you might notice that Florida is a drive-don't-score offense. That's bad news for everyone but Caleb Sturgis.

Tonight is the last game for Tim Tebow and Brandon Spikes, two of the best players in Florida history. But it is also likely the last game for Joe Haden, Aaron Hernandez and Mike and Maurkice Pouncey. These are the guys who need to be asked, "What are you gonna do?" If they are already thinking about Pro Day, Florida might as well not take the field.

Tonight could also be the last game of Urban Meyer. In what was supposed to be a celebration for Tebow and Spikes, with Cincy aiming for history, has been overwhelmed by Meyer's retirement and wavering. It's a shame, not because of Meyer, but because college football is about four-year legacies left by players. Not multi-million dollar coaches. But Meyer also needs to be asked, "What are you gonna do?" He has created this situation and now he has to win in it. I have faith in my coach and faith in my team. They just need to push the right buttons tonight.