I just wanted to let you know that the Bull Gators will be watching Steve Addazio this weekend. You see, we do more than build bronze Gator statues or build bronze Gator player statues. Who do you think paid for those scoreboards and fancy weight rooms? We did. So if maybe we don't like how much we're throwing the ball, maybe we don't get as excited for sticking our names on a concrete stool.

Now, we would never imagine telling Urb or Jeremy what to do. But we do sit next to them on the plane to road games and talk loudly enough for them to hear us. So, we're flying back from Alabama, but trying to stay positive. Stumpy Harris and I are talking about our wild days with Holland & Knight, Urb is doing his cross stitching, and Addazio is playing checkers on his computer. Well, Stumpy starts talking about how we don't like our boy Johnny running the option. And Captain Mustache turns around and says, "Well, we're running the option. Because we run the option. Now, shut up short guy, I need to concentrate on my game." Now look, Stumpy has a sense of humor. He knows why people call him Stumpy. But, that man Addazio messed with the wrong guy. 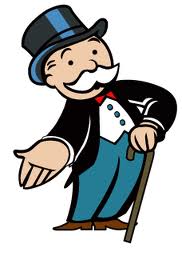 Uncle Pennybags is a lawyer and real estate developer from Tampa.

By the time we got off the plane, the UAA lost $1.2 million and Urb was breathing into a paper bag. They might lose $1.7 million, depending on if I can flip a few homes built on a dump in St. Pete. (Shhhh, no one knows about the money.) I'm telling you, that boy Addazio is running scared now. Did you see his Tuesday press conference? That man was backpedaling quicker than a sorority girl out of the Pike house!

Now listen, keep this under your hat, but Stumpy also threatened to run him over with the truck that plays the fight song. Stumpy does not fool around. He ran over Ed Zaunbrecher in front of a crowd of people in 04, and only the UPD thought it was an accident. The man has beat the federal government in court. He's not worried about a bald man with a mustache.

I'm telling you, you don't have to worry about anything. This guy will be going away eventually. Like I said, we don't tell anyone what to do. But, we can set things in motion. I mean, do you think they renamed North-South for Gale just because he gave cash to the school? Or because he paid NetJets to screw up Notre Dame's order and get to Utah too late to convince Urb to sign with them? (Shhhh, no one knows about that either.)

Anyway, we might be stuck with this problem for a few more games, but it's not like we're 0-10-1. I'd like to tell you I can remember the 0-10-1 season, but I spent the entire Charley Pell era high on blow and developing Carrollwood, so I don't remember much.