Welcome back to our hatred of Florida State

Share All sharing options for: Welcome back to our hatred of Florida State

In May, Gov. Charlie Crist vetoed $9.7 million in state funding for Shands Hospital. The funding was more than just $9.7 million, as the funding was necessary to receive another $12 million in grants for medical care for poor people. Since 1981, Shands had received the funding, until Crist spun bull and said he vetoed the funds because it, "didn't have the complete committee vetting opportunity." The funds were included in Crist's January 2010 proposed budget and all of his previous budget proposals.

Crist probably vetoed the funds because he was pissed at North Florida Republicans who threw him under the bus for Marco Rubio. But, in my warped mind, I see a FSU governor screwing Florida's elite teaching hospital. Look a little deeper and you realize that the Senate budget writer who wrote the Shands appropriation is Ben Hill Griffin's grandson. Plus, Rubio spent his undergrad years at Santa Fe and UF. The recent Legislative special session overrode Crist's veto (the only line-item veto that was addressed), led by a House Speaker who is a UF grad and Senate President who teaches at UF. 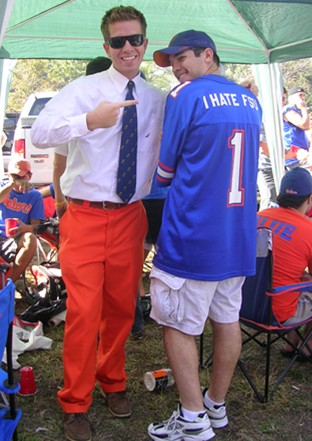 That I see things in shades of orange and blue is probably to be expected. To see government that way, is a little extreme. But such is the case for my love of Florida and my hatred of Florida State.

FSU fans like to claim that UF fans are being elitists or snobs. We're actually being protective of Florida. Two hours north and west of Gainesville is a school that doesn't just have a circus, but includes the circus in their physics curriculum. FSU fans would rather win a National Championship than to have their degrees be worth more than the paper they were printed on. When a cheating scandal flowed through their athletic department, they were more concerned about Bobby Bowden's precious wins, and not about the collateral damage to their elite track and baseball teams. Florida isn't clean either, but we want nothing to do with a school that endorses kids cheating on tests and a fanbase that is more worried about an old man's wins than National Championships in all sports. (For all the discipline problems UF has had, at least we don't tolerate cheating.)

The worst fanbase I have encountered is the one from Tallahassee. LSU fans will curse at you and feed you. Tennessee fans will only stare at you from behind an Earnhardt mustache. Georgia fans will get on their high horse, then sit next to you at the Landings and talk football. FSU fans yell at girls.

Even in a bad year, you see Florida gear in public. My father, who still has his 1000-yard stare from working in Manhattan, had people approach him the two times this year it was cold enough for his UF jacket. In the last five years, more people joined the UF bandwagon, but a surprising number have hung on. They got on because of our athletic success, but stayed on because of our cultural significance.

For a time, FSU was that school. With Deion Sanders and Charlie Ward, FSU entered the national conversation and, in Deion's case, gained fans thanks to their pro play. In Tampa, Derrick Brooks and Warrick Dunn made plenty of Bucs fans into FSU fans, for their class on and off the field. But those four players are gone and retired. In their wake is a football program that can't win their league (unless they get help this weekend) and a school struggling to survive in a bad economy. Contrast that to UF's recent on-field success, ability to adapt to changing economics (block tuition and healthcare for domestic partners) and desire to build bigger and better. The furor over the Shands veto was an example of UF's status statewide. Status is what FSU wants.

For Saturday's game, FSU looks to be a three-point favorite, which I think gives too much credit to the Gators. After all, if the team couldn't show up for a frenzied home crowd with the division on the line, they won't show up in Tally. FSU might win this year, especially considering UF's lack of momentum and the law of averages deciding UF cannot win seven consecutive games in the series. If that is the case, don't get too upset about it, especially in a rebuilding year. After all, we might lose a football game, but we win in life.