[6:53pm] Working on our "gamer" detailing Florida's bid and road. But, let me say this; I'm confident playing BYU.

[6:44pm] From my friend Hanson, "Dan Werner lives to see another day!"

[6:38pm] No Mississippi State or Illinois. I erred when I said Minny didn't get in. They got the 11 in the West. Which is why I missed it, I was too excited about UF.

[6:30pm] Wow, no Minnesota, Illinois or Mississippi State. Yet.

[6:24pm] The Gators better play balls to the wall now. The Committee opened the door for them when they couldn't take care of their business.

[6:21pm] UF, as the ten in West in Oklahoma City, would face winner of K-State and North Texas. Game is Thursday.

[6:14pm] I'm not excited about UF getting in, but I was freaking a bit during the Midwest region selection. Also, I love that Davis picked San Diego State against Tennessee. Everyone knows Bruce Pearl massively screws up one NCAA Tournament game. The challenge is picking which game it will be.

[6:13pm] Tennessee gets the 6th Midwest seed in Providence.

[6:11pm] Those Houston and New Mexico State bids in Midwest are really going to ruin some bubbles.

Ironic CBS showed clips of Florida's last NCAA title before the commercial. Now here are the Gators with shaky chance of getting name called

[6:06pm] Miss State is watching the Selection Show at the airport as they just landed in Mississippi. I know, I'm shocked too that there is an airport in Northern Mississippi.

[6:04pm] Um, why not West Virginia as a No. 1 over Duke? Also, I see Jim Nantz picking up Billy Packer's ACC bias in defending Duke. Nice job.

[6:00pm] Kansas takes the overall No. 1. Seth Davis looks a little too pleased with himself.

[5:56pm] Between the SEC on CBS theme, Masters theme and "One Shining Moment," CBS has the best sports themes. But none top "NBA On NBC."

[5:53pm] The defending champion of the Alligator Army Tournament Pick'em returns to defend her title. She says, "Bring it :)". I don't know about that smiley face. Needs more killer instinct.

[5:36pm] Florida will only have themselves to blame if hot teams like Minnesota, Miss State or Utah State make it. (Utah State had a 17 game winning streak snapped at the worst time, in the WAC final.) If UF had defeated South Alabama and Georgia, the Gators' worst loss would have been South Carolina, who is also Kentucky's worst loss.

[5:23pm] If Miss State didn't knock UF out, Minnesota probably did. They have similar RPI, similar SOS, and each played 11 top-50 RPI teams. Problem was that UF was 3-8 and the Gophers were 5-6 in those games. That doesn't include today's loss to Ohio State. UF was not only hurt by not extending into the SEC Tournament, but also playing very weak Auburn. Minny also won 7 of their last 10 games.

Awwwww, yeahhhhh. It's on. Tell'em how it do, Ric.

It is Selection Sunday and don't let Florida's bubbleness get you down. Because Wednesday is St. Patrick's Day, while Thursday and Friday will be spent watching basketball in the middle of the work and school day. And if you're still in school, it's a good thing you were nice to Mrs. Cook and Miss Ragsdale because they are letting you watch basketball instead of learning.

This also means the 3rd Annual Alligator Army Tournament Pick'em! As always, the first place winner will get a prize; a black and blue Gators messenger bag, perfect for carrying your laptop or cash needed to bail out a Florida football player. To sign up for the 3rd Annual Alligator Army Tournament Pick'em, click here, and enter ID#: 66868 and password: army (must have a Yahoo fantasy sports account to play). If you played in last year's event or our facebook friend, you should have already been invited to the group.

Here is the prize. 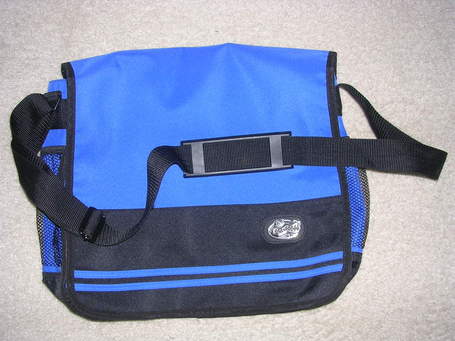 As for the live blog, newest stuff will go to the top of this page.