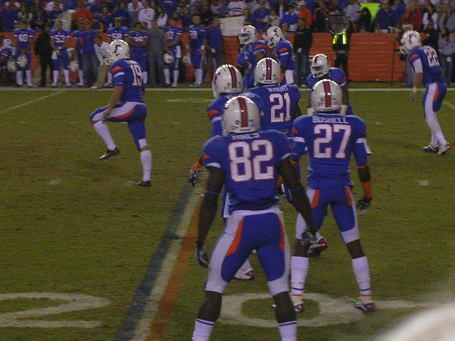 To appreciate Omarius Hines, the best way is from the back. Hines has the ass and legs of an Olympic speedskater. Which would be great if he was a wideout. Now asked to fill the role once occupied by Cornelius Ingram and Aaron Hernandez, Hines has to get bigger up top.

Hines has apparently done that for 2010, which will help him block (something Hernandez struggled with) and fight off defenders to run a proper route (something CI struggled with). Hines is a physical specimen, just like Hernandez and CI, but it is time he puts it all together. In the Gators offense, everyone is expected to be a double threat. We know Hines can run like a horse, but his 14 catches last season did not give us any glimpses of a player who is poised to burst in 2010.

Physically, all the tools seem to be there. He is also embracing his new role and working hard to become the No. 1 tight end over Jordan Reed. But Hines needs to become a featured part of the offense this season to give the Gators a proper threat at tight end.