Once again, we channel our inner Paul Lukas and ask of the Gators' new Nike Pro Combat uniforms; is it good or is it stupid? Picture via here. 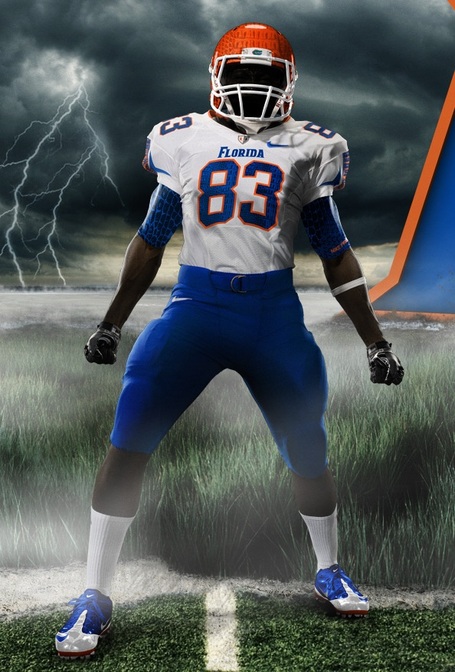 The helmet: While it is orange and has the Gators script, the striping is removed. Instead is an alligator scales pattern. Verdict? Stupid.

The jersey: The alligator scales continue to the numbers. Also, Albert's logo on the left chest is replaced by the basketball team's word mark in the center chest. The collar patch looks like the patch on the Gator basketball jersey. The sleeves have shoulder numbers and another set of Gator scales with random flourishes. Verdict? Stupid.

The pants: If these were solid blue pants, it would be ok. Instead, there is an orange stripe that begins as solid then becomes an alligator print, then fades out. Verdict? Stupid.

Florida will wear these uniforms against Georgia on October 30.

Obviously, I am a uniform traditionalist, so the only way I would have liked this is if it was a throwback. Instead, they want the football team to look like the basketball team.

What do you think?