In Part One of the post-Auburn Theater of Operations, we looked at some plays by both Jacoby Brissett and Jeff Driskel. Today, we continue that theme with some statistics thrown in there for good measure.

Maybe it was a result of poor coaching in the spring? Maybe it is because they had an off summer? I don't know the answer. All I know is that I wouldn't trust either of them leading an FCS football team right now. After a quick glance at the final numbers, it is clear that the numbers back up our assessments made here, here and here. We'll get to the breakdown of the numbers after the jump, at the end of the article. 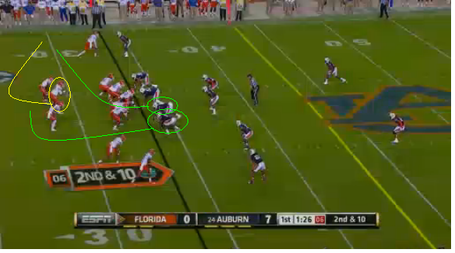 This sack is entirely on Jacoby Brissett. He has roughly five opportunities to get rid of the football. 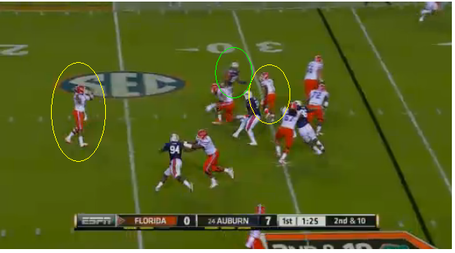 It is obviously a screen pass to Chris Rainey, but the defender (green circle) doesn't allow that. So Brissett is forced to pump fake it. Option No. 1 at this point is to throw the ball into the ground near Rainey. 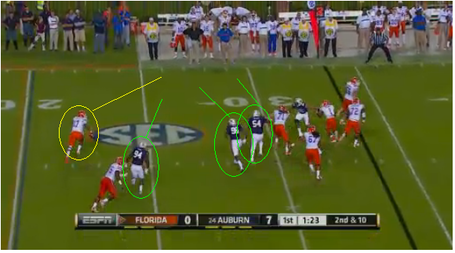 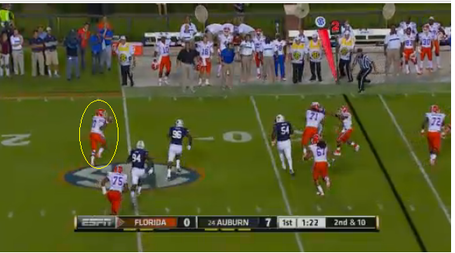 Throw it away now! 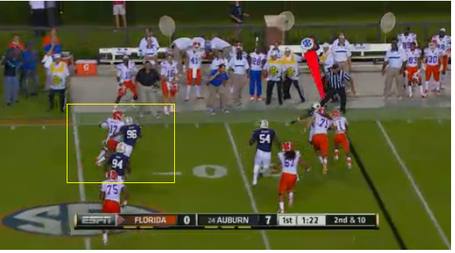 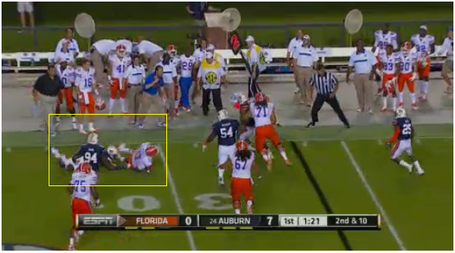 I guess the sack was in the cards. I'm suggesting that the coaches institute a  "throwing the ball away" session in practice this week.

Play No. 2: Jeff Driskel gets sacked to end the game: 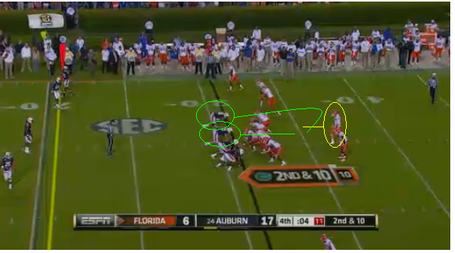 You know, I watched this play roughly 15 times, and I finally came to the conclusion that this sack is half on the offensive line, and half on Jeff Driskel. 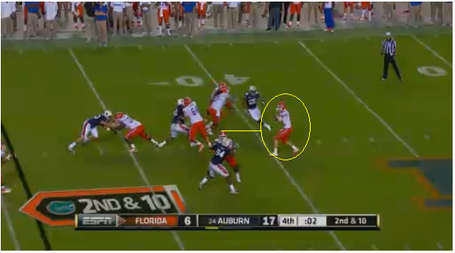 Auburn rushes four, and the offensive line can't block them. How sad is that? Driskel is going to step up in the pocket to avoid Corey Lemonier who is coming around the edge. 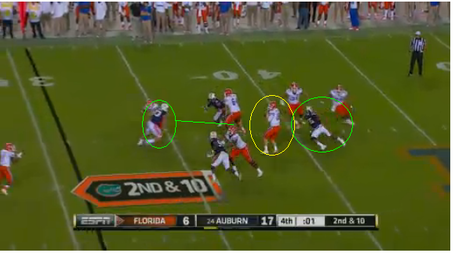 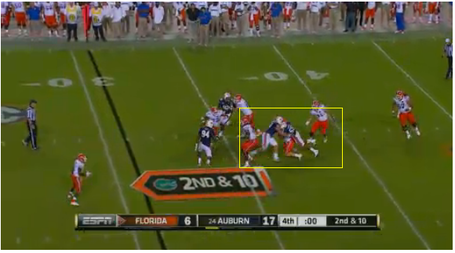 A statistical look at Jacoby Brissett and Jeff Driskel: 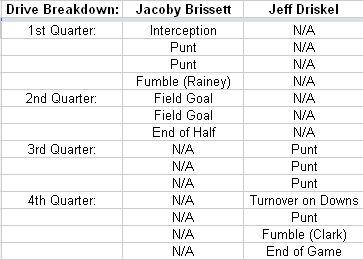 The first chart up is a drive breakdown by quarterback. Each quarterback got six drives. The fumbles by Rainey and Clark came on punt returns, so those don't really count as drives, but they do count as possessions by the Gators.

Just going by this chart, I'd say the advantage was to Jacoby Brissett.

The second chart displayed is the yards per play chart. Please take note in that I did not subtract any yardage for garbage time because they were still mathematically in the game up until the end. The last few plays resulted in a grand total of negative five yards, so it isn't like it made all that much a difference anyway. If anything, it made the numbers look better for Brissett.

The third and final chart is the complete stat breakdown for each quarterback. The difference in the passing yardage can be explained by way of the passing attempts and completions for each quarterback. When Brissett was in the game, the Gators were trying to establish the run; this led to low passing numbers across the board for Brissett. While Driskel was in, the Gators became more of a passing team. So his numbers are better, in part, because he had eight more chances. Now he could just as easily have blown those chances, so something should be said in that he took advantage of the opportunities he had.

Completely missing a wide open Jordan Reed on the flea-flicker was pretty bad, though.

The rushing yards are a moot point as yardage gets taken away for sacks. Brissett's got more yardage, because he was always scrambling forward, instead of throwing the ball away when he took his sacks, while Driskel had almost no chance to do anything on the sacks that he took.

As for Brissett's interception, well, I already covered that in part one.

Please excuse the poor spreadsheets. Until I made these yesterday, it had been roughly 10 years since I last worked with Excel or any other spreadsheet program. I tried to make them color-coded but that didn't really work all that well. I'll figure it out eventually.