Share All sharing options for: Florida Softball's Hannah Rogers Is About to Learn Why Blackface Is A Bad Idea

Update: Rogers has apologized and taken down the pictures. See that tweet after the jump with some further discussion.

I have no problem with people dressing up as whomever they want to be for Halloween, and I try not to take sides on whether that exceptionally inhibition-free night is, on the whole, a good thing. I just stay out of it, mostly.

But I can tell you that there is virtually nothing good that ever comes of donning blackface. Enter these pictures that Florida softball ace Hannah Rogers tweeted tonight, of people at a party dressed like Chris Rainey, Jon Halapio, Clay Burton, and Josh Evans. 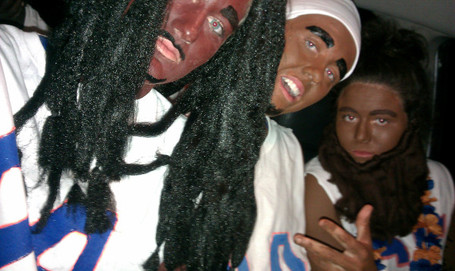 Another picture after the jump. 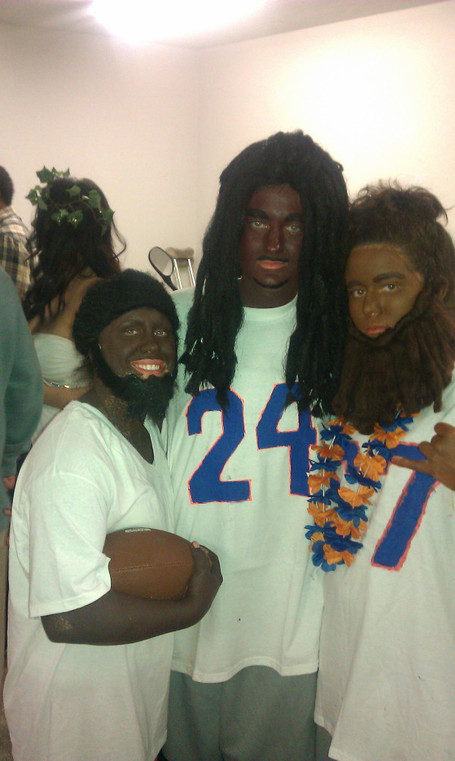 Though we don't know if Rogers is, indeed, in the photos, we know that she's at least endorsing and disseminating them; that alone is troublesome, if only because it shows a tone-deaf tolerance for a practice that has been associated with racism from the days of minstrel shows. If she is in them — which isn't exactly a leap, nor is the the thought that other Florida softball players are in costume as Gators of the gridiron — it's an even dumber choice.

Burton, for his part, retweeted one photo and commented on the choice; Rogers' response to Burton sort of suggests that she doesn't get how weird this may look to some. That's fine: It won't take long for word of this to reach her coaches, and they should, if they have more than a thimbleful of sense, encourage her to delete the pictures and the tweets and apologize for any offense they might have caused. (Ask Ryan Pugh.)

But deleting the pictures isn't going to erase them from the Internet, nor from collective memory. And while, admittedly, the Rainey make-up and hair makes for a rather good costume, the momentary fun of this idea is probably not worth the trouble it will cause.

Update: Around 4:00 p.m. on Saturday, Rogers tweeted this apology:

I just want to apologize if anyone was offended my our Halloween costumes.. that was not our intent to do so. Sorry again!!!!

That's something, but apologizing "if anyone was offended" (rather than "for my potentially offensive choice") and claiming "that was not our intent" is far from perfect, because it turns the blame on those who were offended rather than on those who chose a costume that could be offensive. (I took Floyd Mayweather to task for a similar non-apology.)

So, here, Hannah, from me to you: I'm personally offended that you chose to use blackface to complete a costume and then tweeted the pictures, because I think those actions show a) a lack of understanding of your position and responsibilities as a Florida student-athlete and b) a lack of understanding of why blackface might have been a bad choice.

Your apology also offends me, by implying that your lack of malicious intent indemnifies you. And it shows me that you're grasping that this was wrong more because someone told you it is wrong than because you sincerely believe it was wrong. (Realizing that in the cold light of day and asking Burton to delete his retweet might have helped.)

Furthermore, though I understand your decision to block Alligator Army on Twitter as a bit of ass-covering, I can assure you that it's probably not a very good idea in the long run.

You lost a fan over the last 24 hours, Hannah, and you got a watchdog who will not be as kind should another incident like this transpire. And while your response would probably be that losing a fan who would post something like this means nothing to you, I'd caution that it's that insensitivity got you into this jam in the first place.