Share All sharing options for: Theater of Operations, Florida Vs. Alabama: Reviewing The Gators' Passing Game

If there was one aspect in last Saturday's game between the Alabama Crimson Tide and the Florida Gators that Gators fans might have considered good, it was the passing game. John Brantley led the Gators attack by going 11-of-16 for 190 yards, a touchdown and an interception. That's not bad at all, especially considering that Alabama has one of the best defenses in the country, and has a soon-to-be All-American in Dre Kirkpatrick roaming the secondary.

Then the unthinkable happened. How many Gators fans would have said in August that if Brantley goes down with an injury that the season is in serious jeopardy? I'm guessing none. Now, however, things appear to be the exact opposite.

Here is to a complete and speedy recovery for John Brantley. 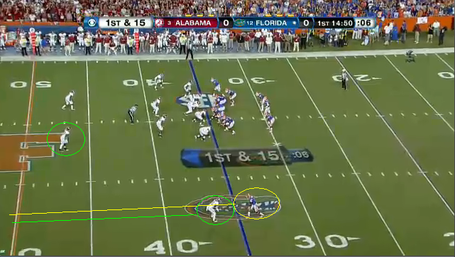 This one is just pure speed on the part of Debose. He is one on one (for a while) against Dre Kirkpatrick. The safety for Alabama, Robert Lester, arrives late. 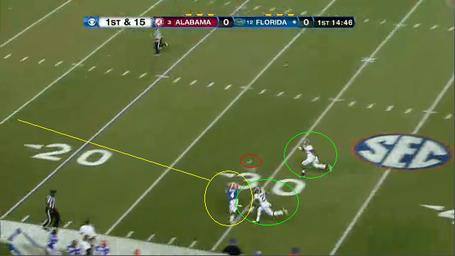 As you can see by the location of the ball (red circle), it is perfectly thrown. Unless Debose drops it, there isn't a thing Alabama can do to prevent the touchdown. 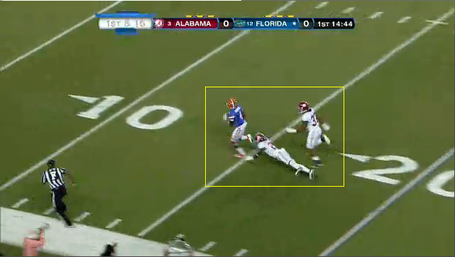 Kirkpatrick gives it a dive, but Debose's speed is too much for him. 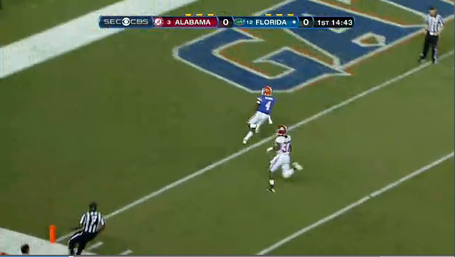 Andre Debose hauls in his first touchdown reception of his Gators career. Yes, that fact surprised me too.

Play No. 2: John Brantley is intercepted by Courtney Upshaw: (As a special bonus, we'll show the CBS field view, and then a view from behind the defense) 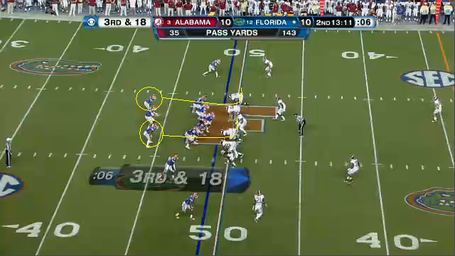 This play is perfectly drawn up by Charlie Weis. Both primary receivers (Trey Burton, lower circle, and Chris Rainey, top circle) are both going to run little quick slants over the middle of the field. They are also going to be wide open. 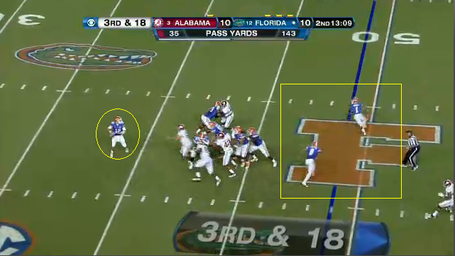 Look at the receivers, and now look at Brantley. I realize that it is third and 18. I also realize that it is a tie game at this point. There is no shame in getting a few yards and then punting the ball for field position. The closest Alabama defender (right hand bottom of screen) to either Burton or Rainey is retreating.

The perfect time to the throw the ball is right now. Now! 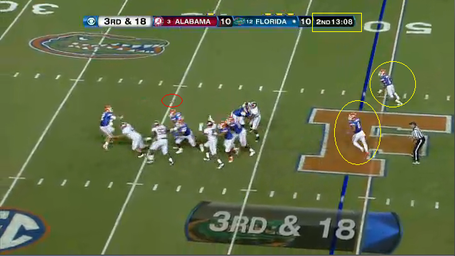 The ball is thrown a second too late. To make matters even worse, because he waited that extra second, Brantley is now under pressure and throwing off of his back foot. 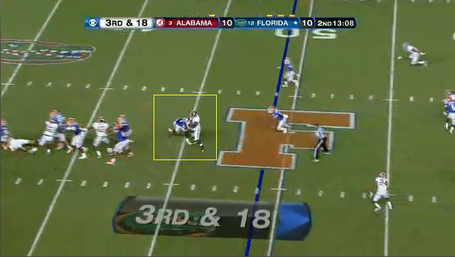 Throwing off of his back foot, Brantley can't get anything on the pass. This makes the trajectory low, and right into the hands of Alabama's Courtney Upshaw, who does make a pretty nifty catch. Upshaw proceeds to take the ball 45 yards to the house. Alabama never looked back.

The same play, but from the view of the defense: 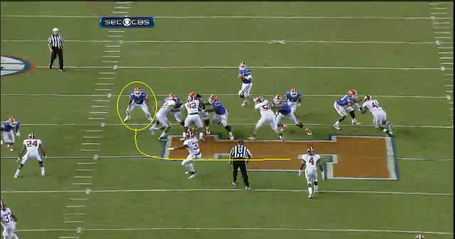 Right now, the play is setting up exactly how it is supposed to. Third and 18 requires soft coverage, and the defense is retreating accordingly. 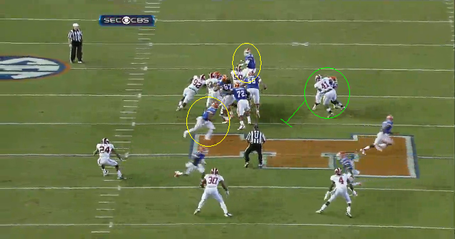 Again, this would be the perfect time for the ball to be in the air. No defenders are in the area, and Burton has room to run. Also, Rainey is out in front as a possible blocker. 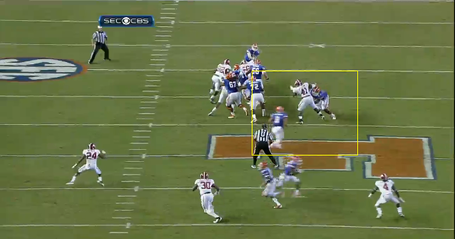 The ball is in the air right now... 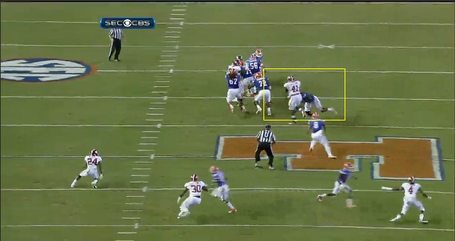 ...and it goes right into the hands of Upshaw.

While the Gators did out-gain the Crimson Tide through the air, 207 yards to 140 yards, it obviously wasn't enough.

For the Gators, it ended up looking like this: