Florida was supposed to have trouble with Ohio State: The Buckeyes are talented, and tall, and can do all the things on offense that a great college basketball team might want to do. And after the Gators got out to a hot start, they did them, coming back for a win that proved both that Ohio State will go a long way this season and that Florida has a long way to go to get to that level.

I dunno: Was it the 16 turnovers or the inability to stop Ohio State from slashing and working underneath without sending the Buckeyes to the free throw line to take 34 free throws? You tell me.

Patric Young more than held his own against Jared Sullinger. Florida's sophomore center recorded his second straight and second career double-double in the game, scoring 14 points and hauling down 12 rebounds, and he held Sullinger to four field goals on eight shots and six rebounds. Those numbers are superb, no matter how you look at it, but considering that Young also did that without encountering foul trouble or letting someone else get off underneath (Sullinger tied for the Buckeyes' rebounding lead), and with post moves rather than dunks, it's fantastic. This is the sort of play Florida needs from Patric Young.

Erik Murphy took four threes and made four threes. The attempts tied a career high; the makes quadrupled a career high. If Murphy's going to be a sniper — and his stroke and rhythm have improved for good, not just for a couple of games — this team could reasonably pursue a strategy of taking 25-30 threes per game. I don't know that Billy Donovan will pursue that strategy, but it's possible.

Florida's fearlessness from deep is always going to be a double-edged sword, but Brad Beal and Kenny Boynton nearly shot the Gators back into the game late. There aren't many late deficits these Gators will face that will be unassailable.

Beal didn't have a great game, with six makes on 16 shots and five turnovers, and it's possible that he was a bit intimidated by the bright lights and tough defense Ohio State can play. But he didn't give up, and had two personal 5-0 runs. That's instant offense that can swing closer games than last night's was, and if this ends up being Beal's worst performance this year, he will have had the best freshman season in Florida basketball history.

I'm used to Boynton jacking threes because he can, and missing them because he's Boynton, but he wasn't the one forcing things last night. He wasn't nearly as active as he could be, with no rebounds and just two assists, but he wasn't killing Florida with bad threes, which is, at least, an improvement in some small measure.

Did you realize that Florida actually outrebounded a team with Jared Sullinger on it 34-25? That happened, and largely because of Will Yeguete pulling down five boards, four on the offensive end. Yeguete's chances of providing that support up front for this undersized team on a consistent basis seem pretty good.

Maybe most importantly, this team took a lead in a hostile environment, lost it, and didn't give up. That's resilience that champions develop over the course of a season when challenges like Ohio State holding a double-digit lead on the road arise, and though Florida didn't quite pass this test with flying colors, it didn't fail it outright.

Florida's going to be a three-happy team. That's what happens when everyone wants to shoot and no one is a go-to creator with dribble penetration. But Young underneath is a rather good option on offense, partly because he's developing a post game that could command double teams and create open threes and partly because he's a capable enough rebounder to look for follows. Threes are far less easy to rebound, and quick threes tend to set up the other team for fast breaks. Florida needs to either make more of the quick ones or show a little patience by passing them up.

Beal, especially, needs to work on his penetration game. Aaron Craft was Ohio State's finest player last night, and should probably sell tapes of his defensive performance: He forced Beal into all sorts of weird shots and uncomfortable situations when he tried to slash, and effectively welcomed a freshman to college basketball with graduate-level work. Beal's smart, so he'll learn, but that game proved that he has plenty to learn. 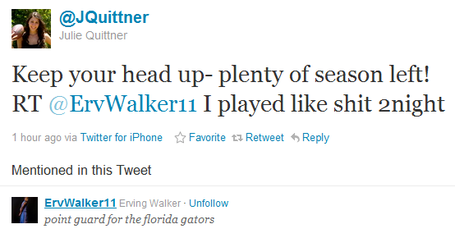 He's since deleted the tweet (and thanks to Julie Quittner for saving it with the retweet), but he's sort of right. Walker made one of six shots and no threes, had three turnovers and just four assists, and scored just four points. (He did have six rebounds, though?) That wasn't the kind of game Walker wants to have or Donovan wants from him as a baseline, much less a good game; he's scored under five points and had three turnovers just once before at Florida, in his third game ever against Southern Utah in 2008. But Erv knows that it was a bad game, and Erv can take it as a wake-up call. Hopefully, he responds to it by focusing on ball security and successful distribution, rather than out-of-control play-making.

Speaking of turnovers: HOLY CATS, GUYS, HANG ON TO THE BALL. Florida's 16 turnovers last night were its most since a one-point win over Tennessee last season, and that sort of carelessness is a great way to give another team a game. Craft deserves credit for about 10 of those turnovers, probably, and Florida won't face a defender as good as he is for some time, but the Gators helped him out. They just can't do that.

Another thing Florida can't do: Foul slashers. Ohio State paraded to the line 34 times and made 27 free throws; that's a great way to negate the otherwise good defense Florida played (Ohio State shot 47.2% from the field and 26.7% from three). If Young could more or less defend Sullinger without help and without fouling, why can't Florida's guards figure out how to do the same against "lesser" players?