Within this edition of Theater of Operations, another spreadsheet makes an appearance. And yes, it is frightening indeed.

The Florida Gators' offensive gameplan against the Furman Paladins was about what we figured it would be: just hand the ball off to Chris Rainey and Jeff Demps and let them do their thing. But that plan had to be changed almost from the get-go, as Furman used a combination of offense and defense to roll out to an early 22-7 lead.

Being behind like that will definitely change a team's gameplan. Sure, some of that is on the defense (more on that tomorrow), but it wasn't like the Gators offense took the Furman defense by storm. The Gators, for the better part of the first half, struggled to move the ball with any consistency.

Within that first half, we saw arguably the worst first quarter the Gators have played in a long time. Truth be told, that was probably the worst quarter the Gators have played since the fourth quarter against Miami way back in 2003. Thankfully, the majority of the plays we are going to look at after the jump occur in the portion of the game in which the Gators, by and large, played well. 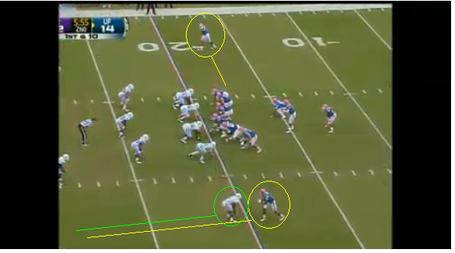 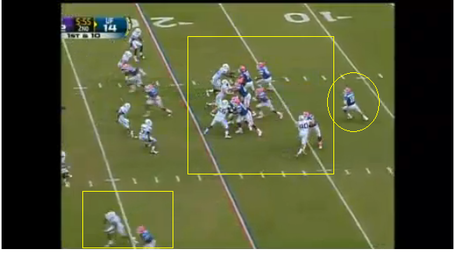 As Brantley (yellow circle) is setting his feet to throw, the offensive line (big yellow square) does a fantastic job of blocking every single pass-rusher. Also, Debose (small yellow square) hasn't quite gotten past the defensive back yet. 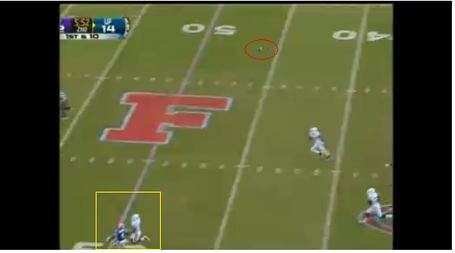 As Debose (yellow square) and the ball (red circle) come into view, it is clear that while Debose has his defender beat, it isn't by much. 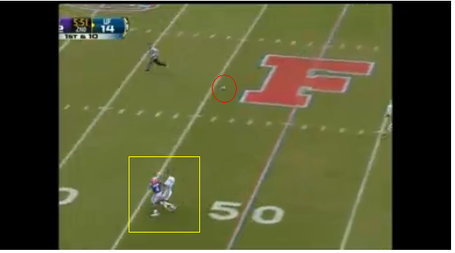 Debose and the defender (yellow square) are fighting for position. There isn't a whole heck of a lot of contact, but you can tell from the video that there is some. Debose does a great job of shifting his body to the inside in order to gain a more favorable position. 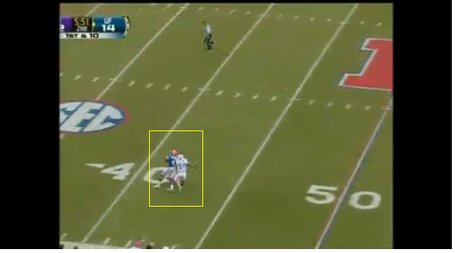 Debose makes a great catch on the inside of the defender (yellow square), breaks free and is off to the races. 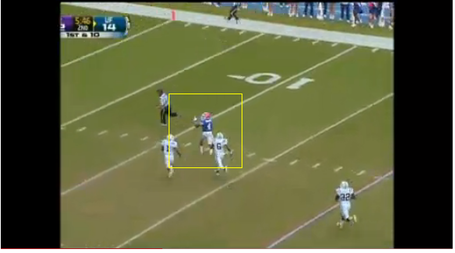 During the run to the endzone, Debose makes what appears to be a taunt. The announcers during the game mentioned it, but it wasn't called. It's hard to tell from this angle exactly what Debose is doing, but the Gators, at this point, shouldn't be doing anything that could be considered remotely close to taunting. 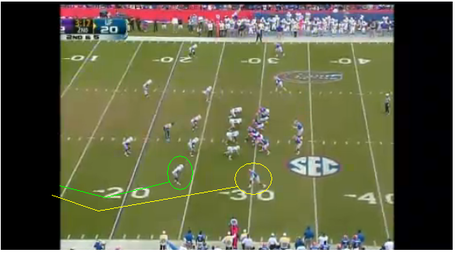 This is pretty much the first appearance of Dunbar (yellow circle) in a non-blocking highlight since the spring football game back in April. 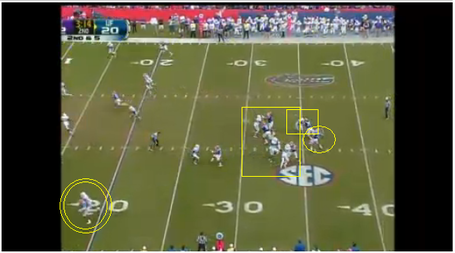 As Brantley (single yellow circle) releases the ball, he again benefits from some great blocking. The offensive line (yellow squares) does a great job, blocking every single player they had marked. And Dunbar (double yellow circle) is even with the defensive back. 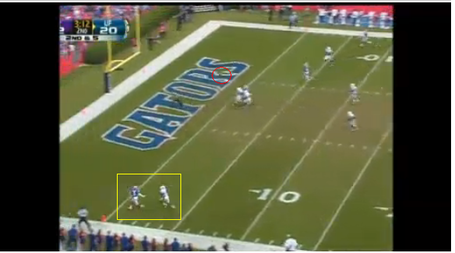 As the ball (red circle) passes the goal line, Dunbar has his man beat (yellow square) by a good two yards. 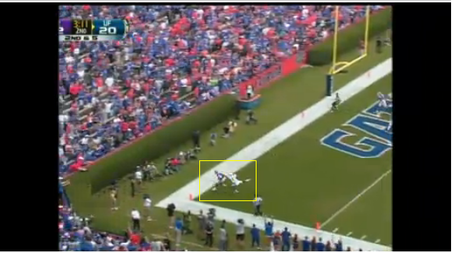 This really is a great catch by Dunbar (yellow square): over-the-shoulder, while keeping his feet (both of them) in the field of play. This was also, in my opinion, Brantley's best throw of the day. 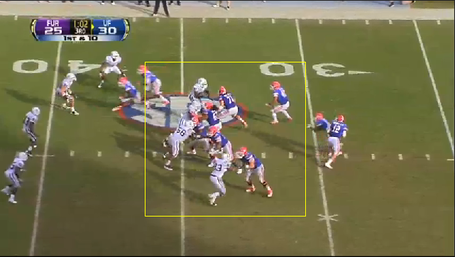 The problem with a lot of the videos that are posted on GatorVision is that it is difficult to get a look at the pre-snap orientation on any given play. Debose (not pictured) is at the bottom of the screen again. Yet again, the offensive line (yellow square) does a great job, creating a nice pocket for Brantley to throw from. 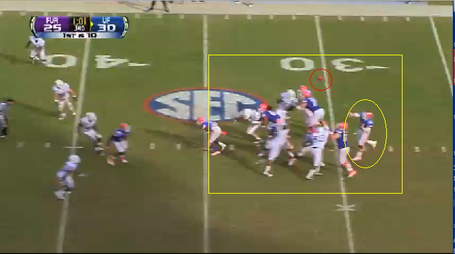 Just look at that protection for Brantley as he releases the ball. Fantastic. 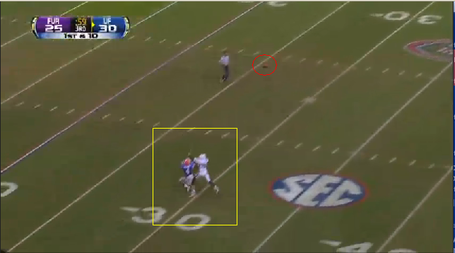 As the ball (red circle) is arriving, both Debose and the defender are raising their hands in anticipation. 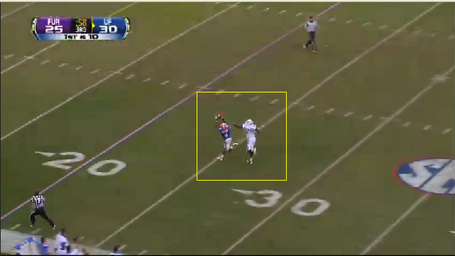 What a catch by Debose!

Let's take a look at that catch from another angle: 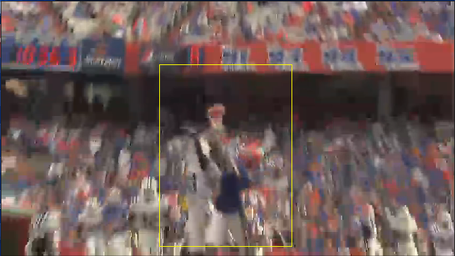 Another drawback that comes with using GatorVision videos for something like this is clearly picture quality. (Pun intended.) It is tough to tell, due to the poor quality of the video/picture, but the ball is in the hands of an outstretched hands of Andre Debose. This is a great catch. Nothing more needs to be said. 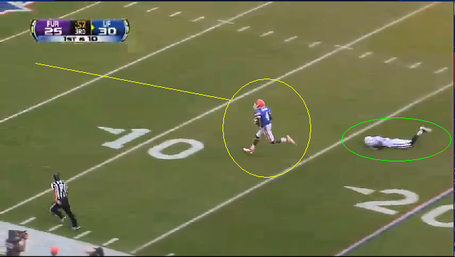 The defender (green circle) falls down and that allows Debose (yellow circle) to literally stroll into the endzone for a touchdown.

You know, it's funny. When I think about it, the offense did not play poorly at all. At no time was the offense fully bogged down, nor did it stumble for any great length of time. The only times the offense had the ball and came away with no points, were because of three punts, two missed field goals, one safety, and running out the clock at the end of game. And the only consecutive drives without points came at the beginning and the end of the game.

Just look at the drive chart if you don't believe me: 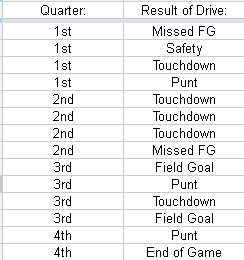 Now, a couple of this should be noted about this chart. The first thing is that this chart shows drives that started in the stated quarter. So the field goal that the Gators scored in the fourth quarter counts as a third-quarter drive, because said drive began in the third quarter. The second thing that should be noted is that while the Gators did score two touchdowns in the fourth quarter, those are defensive scores.

When looking at that chart, it is clear that the Gators' best quarter from the perspective of the offense was the second quarter. Three touchdowns and a missed 40-yard field goal is evidence of very solid play. The third quarter was, by far, the second-best quarter for the Gators offense; then come the the first quarter and the fourth.

Within the preview edition of Theater of Operations, I pointed out that Furman's best quarter was, in fact, the first quarter. The aforementioned first quarter and the fourth quarter played out just like they have all season for the Paladins, from a scoring perspective.

The Gators offense performed exactly as you'd have expected had you looked at Furman's defense as a whole this season. All season, Furman has been a first-half team, and this game proved to be no different.

Tomorrow, Theater of Operations continues with a look at how the Florida Gators defense fared against the Paladin offense.