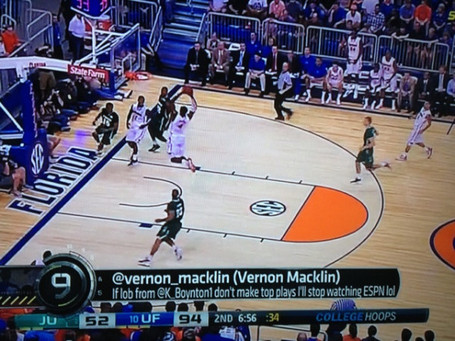 (Photo via Only Gators.)

Patric Young's massive throwdown from Kenny Boynton in the second half of Florida's 107-62 trouncing of Jacksonville was seismic, so much so that Young got a pseudo-admonishment from Billy Donovan moments afterward, according to Rachel George of the Orlando Sentinel:

Young said after alley-oop, Billy D told him, "I'm gonna take you out bc. I don't want to forfeit the game for the backboard being broken."

This is where Florida is now: Finally, the Gators are once again good enough to destroy lesser competition if they want to. A smattering of notes after the jump, and apologies for the mirrored video; it's the best I could find.