Just two years into its program history, Florida's lacrosse team has knocked off the sport's reigning royal, and appears poised to make a national title run.

I am a women's lacrosse convert. It would be hard not to be after Florida's stirring 13-11 triumph over Northwestern at Donald R. Dizney Field on Thursday night.

No. 6 Florida trailed only briefly against No. 2 Northwestern, after a Wildcats goal 22 seconds in put the Gators in an early hole. But just over a minute later, Ashley Bruns equalized, followed by Kitty Cullen giving the Gators a lead they would not relinquish en route to a 5-1 run to start the game.

But being up 5-1 early and 9-4 at halftime didn't give the Gators a smooth road to the program's signature win. Northwestern — which raced out to a 15-0 lead against Florida last year in a 19-5 dusting — scored three goals in the first three minutes of the second half, prompting me to quip in the stands, "Well, we're only on pace to lose 34-9." I'm glad I was wrong: After that sluggish start, Florida warmed up again, and was every bit Northwestern's equal in a contentious second half.

Kitty Cullen carried the Gators on offense, especially in the second half, notching two free position goals to stake Florida to a 12-8 advantage with less than 15 minutes remaining, then scoring the game's final goal with 5:35 and giving the Gators breathing room for a frantic finish that included Florida being down two players who received yellow cards.

But goalkeeper Mikey Meagher came up huge in the last five minutes, stoning a series of close range Northwestern shots, and as the clock ticked down, Florida's sideline was bouncing — half in shock, half in recognition of the significance of this win to the Florida lacrosse program. 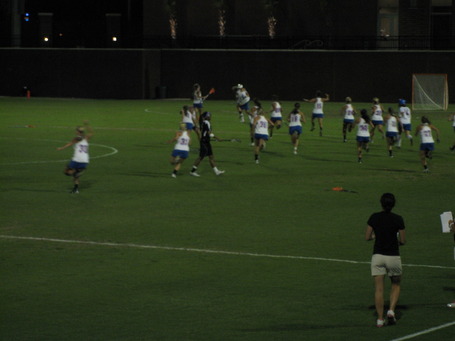 With the victory, Florida moves to 13-1 on the season and clinches the No. 1 seed in the American Lacrosse Conference Tournament. And after putting Northwestern in its first four- and five-goal deficits of the year, the Gators gave the vaunted Wildcats, who have played for the last six national titles, their first loss in ALC play since May 2004.

So, yes, these Gators have arrived, and stand as legitimate national title contenders.

Cullen's six goals on the night give her an NCAA-best 67 for the season, and a combination of speed, agility — she flummoxed Northwestern defenders with an arsenal of spin moves — and scoring touch makes her a very dangerous offensive option.

But on a team with just one upperclass(wo)man, it's not youth but talent that defines the Gators. Florida only briefly looked skittish against a Northwestern team with a championship pedigree, and refused to wilt even after the Wildcats made runs. The Gators also seemed faster than the Wildcats (who had a strength edge), and were able to win 16 ground balls to Northwestern's 10 as a result.

Will the Gators carry this momentum through the two road games against Vanderbilt and Cornell that finish their regular season schedule? Through the ALC Tournament? Into the NCAA Tournament? It's impossible to know, but it would be hard to forgive them for a lapse against one of those two teams after a victory that seemed as monumental in the moment as any I've seen in person as a Gator.

At the very, very least, those women made it great to be a Florida Gator on Thursday night. And they've won a diehard fan for life.

I'll have more pictures and some notes (including my very amusing interaction with Patric Young) when I get a chance to add them later today, but did you go to the game? Did you listen on the radio? How do you feel about Gators lacrosse today?