Florida's 200 SEC Championships By the Numbers, Part One: Breakdown By Team

Share All sharing options for: Florida's 200 SEC Championships By the Numbers, Part One: Breakdown By Team

You may or may not have noticed that Florida won its 200th SEC Championship over the weekend when the men's golf team prevailed in the SEC Tournament. That's okay: we'll be helping you understand just how successful the Gators have been in collecting all that hardware all this week. GatorZone and Only Gators have plenty of the raw numbers; we're going to look at the trends and such.

But first, a pie chart.

This graph of Florida's SEC Championships by program is via nces.ed.gov. I believe you can click to enlarge. (And before you ask: There was nothing I could do about the text overruns or the weird color sequence at the end.) 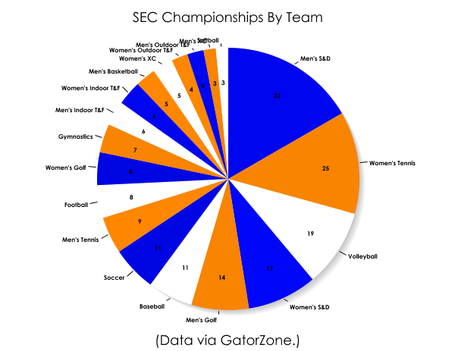