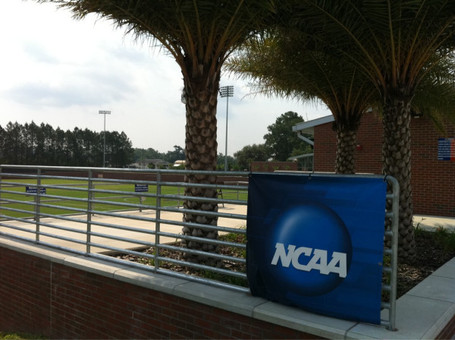 Brittany Dashiell and Kitty Cullen made sure the Gators started strong, scoring the first two goals of the game in 33 seconds. Cullen, the American Lacrosse Conference Player of the Year who is second in the NCAA this season in total goals (71) and goals per game (3.94), scored four goals against the Cardinals.

For what became a fast-paced game, the end was surprisingly quiet: Neither team scored in the last 10:15 of play.

ALC Coach of the Year Amanda O'Leary has led the Gators to an undefeated record in the conference, a national ranking as high as No. 2, and a win in the first NCAA Tournament appearance for the Gators in just the second season of the program. Now, she will take her team into the program's first NCAA Tournament quarterfinal appearance in Florida history.

The Gators will host the winner of the Duke-Pennsylvania game in the quarterfinals next Saturday at Dizney Stadium.