If you watched any Florida Gators basketball last season, you probably fell in love with Patric Young. The freshman big man is hard not to love: he bangs inside, comes up with enormous blocks, and is generally the most exciting Florida frontcourt player since that Joakim Noah character. But I've enjoyed following him on Twitter, too (@Patric4Young) and I got to chatting with him last night about his game. Here's what he wants to be: 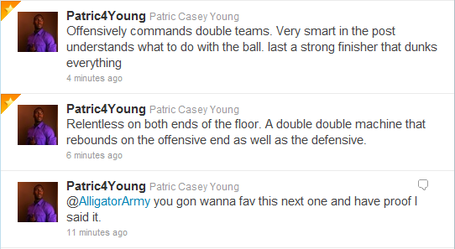 Young's spending at least part of this summer working out with Montverde Academy assistant coach Alton Clark, and while that name might not mean much to you, Montverde has produced its fair share of successful basketball alumni and is perennially in the national high school basketball rankings. And I'm okay with Young learning from a guy who comes off as sharp as Clark does on Twitter, whether or not Clark worked with former Montverde players like Solomon Alabi and Luc Mbah a Moute.

Young follows @AlligatorArmy — good taste, that Patric Young — and trust me when I say I'm going to keep him honest on these goals. But I think the most exciting part of our conversation was this comment: 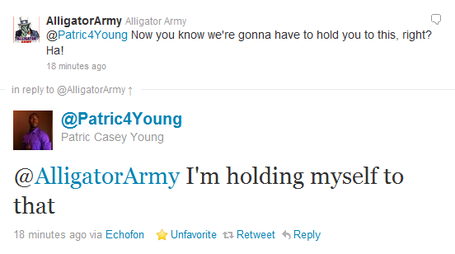 A guy who is already good, wants to get better, and is candid about it? If Patric Young isn't your favorite Gator on the hardwood now, he's definitely going to be making a run at that before long. And that can't be anything but good for the Gators in general.