Share All sharing options for: The Gator Vault: David Eckstein

This is the first of what will be a semi-regular series throughout the dreaded "dead period".  In this series I will be writing short-to-medium accounts of the careers of former Gators that were either not stars (at least not in the Tebow/Emmitt sense), or did well but played in sports not called Football or Basketball.  Please let me know what you think, and we'll see where this goes!  A empezar! 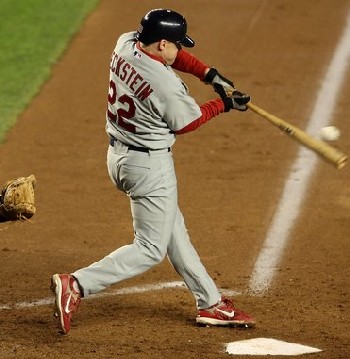 David Eckstein was something of a Dustin Pedroia, before Pedroia was Pedroia, in that he's frequently described as "scrappy".  "Scrappy", in addition to being one of the worst cartoon characters ever, is a derisively affectionate way of calling a baseball player short or small while still noting that somehow he makes things happen.  This is similar to football's "possession receiver" being code for a receiver who lacks speed but makes catches and runs reliable routes.

Eckstein played baseball at Florida in the mid-nineties, first as a walk-on, but eventually got a scholarship.  He achieved quite a bit during his time in Gainesville; here's a list of things he achieved that I did not:

These are probably not the only things he did that I didn't.  Long story short, my athletic resume is somewhat inferior.

After finding much success in the ping-happy world of college baseball, Eckstein continued on to Major League Baseball, playing for the Angels, Cardinals, Blue Jays, Diamondbacks, and Padres, moving between second base and shortstop.  He made the National League All-Star team in 2005, and again in 2006.

Undoubtedly, the highlight of his career  came in 2006, when he not only played for the World Series champion St. Louis Cardinals,  he was named the World Series MVP.  Rarefied air, that is.  It's certainly worth mentioning that he was also a member of the Anaheim Angels team that won the 2002 World Series.  To add one more trophy to his mantle, he was the inaugural winner of the MLBPAA's Heart & Hustle Award.

However, Eckstein's most noble act will come away from the diamond.  Sadly, renal failure runs in his family.  To combat this,he's following in his family members' footsteps by planning to donate a kidney to help his affected loved ones. The Bull Gator, author and commenter on this here blog, has previously written about Eckstein's family.  If you didn't like Eckstein before, that has to put him solidly in the "good guy" column.

Eckstein also wrote a book, Have Heart, which can be read about on his website.

Hope the AA faithful enjoyed this article- I'll do my best to keep 'em coming like threes from the hands of Humphrey (well...maybe not quite THAT often).