After a thrilling 6-4 victory over the Vanderbilt Commodores (54-12), the Florida Gators are returning to the College World Series Finals. Preston Tucker continues his candidacy for Most Outstanding Player in the NCAA Tournament when he hit an RBI single to break a 4-4 tie and put the Gators up for good. The RBI was Tucker's 20th of the NCAA Tournament, easily leading all hitters. Florida is returning to the finals for the first time since 2005 and only their second time ever. Oh, and Mike Zunino broke an aluminum bat.

Without further ado, on to the highlights...

Vanderbilt jumped on the board in the first when Aaron Westlake hit a solo home run into the right field bullpen to put the Commodores up 1-0. The homer was his team leading 18th on the season.

Florida knotted up the score when Tucker had an RBI groundout in the bottom of the third. The Gators took the lead in the fourth when Nolan Fontana came through with a two run single to make the score 3-1. In the sixth, Daniel Pigott scored when Bryson Smith grounded into a double play. That pushed the score to 4-1.

That seemed like plenty of run support for Florida starter Alex Panteliodis (6-2, 3.95 ERA). Affectionately called "Pants" and "Panda", Panteliodis was dealing after the Westlake home run, giving up only three hits total, striking out three, and giving up that one run. Pants only pitched six innings while his pitch count was relatively low.

Steven "Paco" Rodriguez was the next pitcher charged with shutting down the Commodore offense. Rodriguez came in during the eighth and gave up singles to both batters he faced before he gave way to closer Austin Maddox. This is the same Austin Maddox that hadn't played in a game since the Gainesville Regional. Maddox gave up an infield single to Jason Esposito and hit Conrad Gregor to tie the score at 4-4.

The Gators responded in the bottom of the eighth by loading up the bases for Mr. Clutch Preston Tucker. Tucker came through with an opposite field single that actually hit the fence to give Florida a 5-4 lead. The next batter, Mike Zunino, became the first person we've seen break an aluminum bat (at least the new BBCOR bats). Zunino actually struck out, but a wild pitch allowed Cody Dent to score to bring us to our final score of 6-4.

The Gators end up handing the Commodores almost half of their losses: five out of twelve. Florida will now have the chance to become the first SEC school in history to win NCAA titles in football, men's basketball, and baseball. The Gators will face the winner of Virginia and South Carolina Monday.

P.S. This graphic on SportsCenter is awesome: 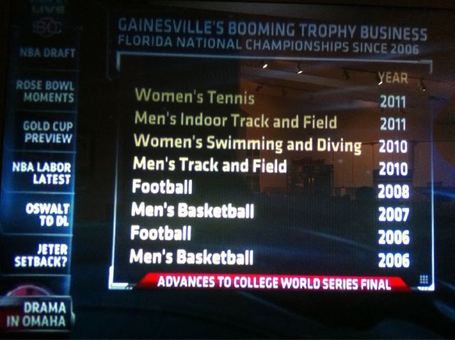