The Weekend Review has no love for you, Cocky. (Via @GatorZoneBB.) 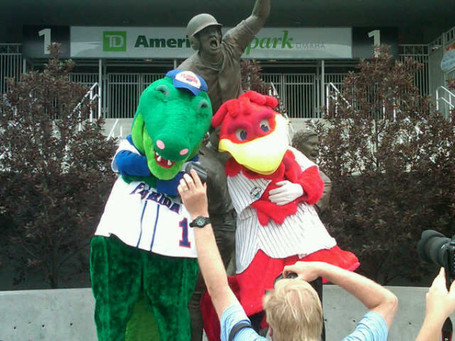 For the NCAA title, for the SEC East: Basically the only thing that happened in Florida athletics this weekend that is worth talking about at your water cooler is this: Florida topped Vanderbilt 6-4 on Friday to advance to the 2011 College World Series Championship Series, beginning tonight at 8 p.m. Eastern on ESPN.

The Gators will play South Carolina, continuing the SEC East's domination of both the college baseball landscape and the CWS itself in 2011. Neither the Gators nor Gamecocks have lost a game in the College World Series heading into tonight's matchup, meaning both teams have well-rested pitching staffs and well-oiled offenses to work with. We'll have all sorts of preview coverage of tonight's game leading up to the first pitch, but it suffices to say that Florida attempting to win the first baseball national championship in school history — and add another trophy to the stocked cases in Gainesville — should be front and center for every Gators fan today.