It's no surprise that Gators fans are excited for Tim Tebow to return to Gainesville for a book signing in support of his memoir, Through My Eyes. Seeing that there are fans camped out in that Walmart right now for a book signing that won't begin until 6 p.m. Thursday is a little stunning, though. Via @lilili152, here's how the Archer Road Walmart looked at around midnight Wednesday: 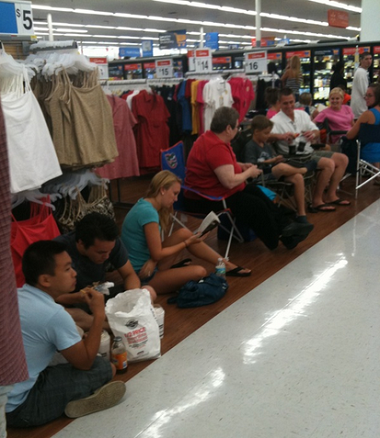 So there are definitely some diehard Florida fans awaiting Tebow already. But what you can't see in that picture is that there are Tebow fans who have already left, frustrated by the book signing's rules. And they're venting.

On the official Facebook page for Tebow's signing, created by the official Tim Tebow page, one fan, Crystal, says "In line waiting for your book! It's chaos at Walmart in Gator Country!" That's about the most positive comment, and the one with the best grammar. Here's George:

its a total cluster at Wal-Mart I just left there and they told us you have to buy the book there at Midnight and they may sell more then 600 books and if you choose to leave they cant guarantee you will get that book signed even though you just got it there. The suggest you camp out for the next 24 hours and get it signed. they will not give out tickets nor organize the line. The people at the store are blaming their corporate system and the publishers for all the rules. There were about 20 people in line when I left about 6:15 (p.m. Wednesday) ...good luck if you still decide to go

I am sorry I can not attend. I bought my book at Amazon.com... No where was it mentioned until tonight that you had to buy the book at the Archer Road Walmart only... :( This saddens me to no end. I planned around my job, my children's school, and a STATE Baseball tournament.. Don't get me wrong, still love my Tebow, still reading the book, it will only be missing the signature... :( God Bless Tim, I hope you have a wonderful signing back in the GATOR NATION!!!

And then there's Mitchell, who wins the prize for verbosity:

Tim Tebow should be embarrassed that he is allowing his perfect Gainesville/Gator image be destroyed by a company like Walmart. The manager at Walmart basically does not care about its customers and only cares about the almighty (sorry Tim) dollar. They printed a document with the rules that I picked up on Sunday that never said you had to purchase the book from Walmart to have Tim sign it. They had no copies available to purchase and even suggested going to Book a Million to get one. I purchased two copies at Books a Million and now I am being told that Tim cannot sign my books because they were not purchased at Walmart. To make things worse they won't even let you take a picture with Tim. Maybe they should just get a stamp with his name and put up a poster picture of Tim and let people come in and have their books stamped. I hope others will call and complain to Walmart. Their local number is 352-371-3171. The store manager's name is Shawnta and Matt is the electronics zone manager. They will not give out their last names. Tomorrow will be a very sad day in Gainesville and for Tim Tebow.

I want to apologize to Tim for not being able to come see him tomorrow or to have him sign my book. I had a very good friend drive up from Miami to have Tim sign her book and now she is also out of luck. Tim you are a very special person and I would love to meet you and have you sign my book but Walmart has destroyed that dream and I guess I will just have to have your book without a signature.

Tim Tebow fans: The sort of people who get screwed out of their hero's autograph because of the powers that be, then apologize to Tebow. In the most sincere way: There is something very cool about that, even if there's a significant chance that calling ahead to learn "You need to buy the book here, and we're selling 600 copies at midnight" would have obviated some of the anger.

On a more personal level: That's my Walmart. It's five minutes from my apartment in Gainesville, and I've been there enough that I know the manager's last name. I have been there at midnight and later before, because I'm a college student and that happens; the last time I was there past sunset, at about midnight on a Saturday a couple of weeks ago, there were about 40 people in the store between customers and staff. So for there to be hundreds of people there tonight is likely a big deal, even if it's not exactly a shock and doesn't quite jibe with "chaos" as a description.

My heart goes out to the fans who thought they were just going to be able to spend their time in a Walmart for a chance to see Tebow, and didn't anticipate either a line that's going to consume upwards of 18 hours of their lives or the effective $20 surcharge for the autograph. Tebow autograph sessions can run significantly higher than that, but it's the principle, right? And whichever suit made the call that Tebow in Gainesville would demand only 600 books needs a serious lesson on the dedication of Gators fans, and Tebow's legion in particular.

I've reached out to someone who was in line and left, and will hear all stories at alligatorarmy@gmail.com if you have them. I may also be going to Walmart to check on some of this stuff and buy myself a cake pan (yeah, really) in the next 24 hours; if I do, I'll come back with quotes and pictures.