Share All sharing options for: The Gator Vault: Donnell Harvey 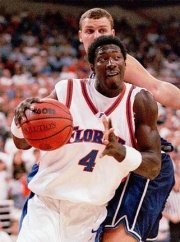 Much as it stinks to acknowledge, Kentucky hasn’t cornered the market on one-and-doners.  While Billy Donovan (especially in recent years) has avoided the rental players, Florida has still had a few early departures, though that doesn’t make them any less memorable.

Donnell Harvey was known, in large part, for his Freakish (yes, Kearse-like) athleticism.  In what would be scientifically described as "nucking futs", Harvey was reported to have an 83" wingspan. That's just not fair.  He combined his great reach with even greater, almost scary levels of energy.  Though he was underdeveloped on the offensive end, he nevertheless could have huge impacts on games (I may be getting ahead of myself, but in terms of defensive skills and raw potential, I see a lot of Harvey in Patric Young, but thankfully Young is coming back).  With how talented and exciting Donnell was, he's one of  those "what what if..." guys, where you can't help but wonder, if he'd stayed at least another season and refined his game in a Horfordian manner, what he might've turned into.  I can't blame him for leaving- by many accounts, he grew up very, very poor in Shellman, Georgia, so when a kid goes from dirt poor to the possibility of millions, it's hard to tell him to stay in school (cue Helen Lovejoy begging someone to please think of the children).

Harvey was certainly well-regarded coming out of high school, with a sky-high pile of accolades to his names.  He marked another McDonald's All-American recruit for Donovan, making the 1999 team.  Even better, he was named the Naismith Prep Player of the Year for 1999.

In addition to his high school notoriety, Harvey did well in his single season in Gainesville.  He averaged 10.1 points, 7 rebounds, 1 assist, and .8 blocks per game, landing him on Basketball News All-Freshman Team and the Coaches' SEC All-Freshman Team.

Harvey turned pro after his freshman year, becoming the 22nd pick in the infamous 2000 NBA Draft, going to the New York Knicks (though he was subsequently dealt to the Mavericks).  He spent one and a half seasons in Dallas, as well as parts of seasons with the Nuggets, Magic, and Suns.  He also spent six days on the Hawks' roster, as well as signing a pair of 10-day contracts with the Nets.  In 2007 he signed a contract with the Jazz, but was placed on waivers less than a month later.  Harvey averaged 5.6 ppg, 4 rpg, and .8 apg in his NBA career.

Tracking down his post-NBA journeys took some doing, but it appears that Mr. Harvey has become quite the globetrotter (no word on whether he's been promoted to Generals.  Eh, that sounded funnier in my head).  The 2005-6 season saw Harvey playing with Greek A-1 League club Panionios Athens, averaging 12.7 ppgoints and 5.8 rpg. During the 2006-2007 season, he played for American-player magnet Besiktas ColaTurka Istanbul of the Turkish Men's Basketball League, where he averaged 14.1 ppg and 8.8 rpg. The next season he stayed in the Turkish league but changed teams, switching to Banvit Basketbol. The following season he signed a contract with Solsonica Rieti of the Italian Serie A League, but never actually played for them.  A more detailed summary of those seasons here.

Harvey spent the 2008-9 season playing (and apparently doing fairly well) for Jiangsu Nangang Dragons Nanjing in China, and another part of 2009 with Gigantes de Carolina of the Puerto Rican league.  Harvey returned to the Dragons for the 2009-10 season, before trading Beijing for Bosnia and its KK Igokea club, where he's been since the 2010-11 season.

Word is he continues getting sniffs from NBA teams, so maybe one day he can join his fellow Florida big men in the league soon!