Share All sharing options for: 50 For 50, No. 36: Florida Walk-On Jesse Schmitt Can Do Push-Ups And Kill Zombies 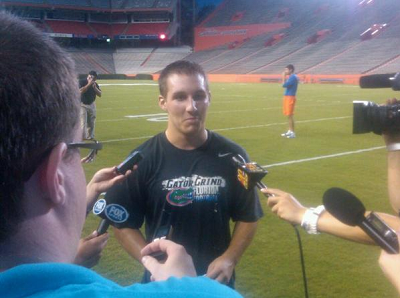 Schmitt's only on anyone's radar because of those push-ups. Listed as a 5'7", 175-pound fullback — yeah, he's definitely going to be able to handle the typical SEC linebacker — Schmitt took part in tonight's Gators Charity Challenge, an event that brought in 650 pounds of donations for the Salvation Army. He was part of the push-up contest, and won it, beating Gators Jeremy Brown and Chris Rainey, among others. (He did "a lot" of push-ups.)

While that doesn't mean he's any good at football (a certain Kenny Powers line comes to mind), it certainly helps build Schmitt's profile as maybe the coolest walk-on in college football. See, Schmitt, in addition to walking onto the Florida football team, brought Humans vs. Zombies, a campus-wide survival game, to Gainesville.

It's no surprise Schmitt beat all comers in a push-up competition, much as he did in a UF Rec Sports competition this January: in addition to being a junior double-majoring in political science and economics and a zombie hunt organizer, his Facebook indicates that he's a Marine Corps officer candidate.

If I had to bet, there's about a 0.000001% chance that Schmitt makes an on-field contribution for Florida this fall. But it can't hurt to have a guy like Schmitt working with your team, right? Players who don't come in with scholarships or otherworldly athletic gifts can still push the guys ahead of them on the depth chart with hard work, and this Gators team, undermanned as it is, may need every little push.

And, heck, these Gators might also be a bit more ready for the zombie apocalypse because of Schmitt. That might pay off in a bowl rematch with Penn State.