Share All sharing options for: The Gator Vault: Justin Hamilton

The bar exam is over and I'm back among the living. Yay, capitalism!  Now, on to one of the more dependable players in recent UF hardwood history. 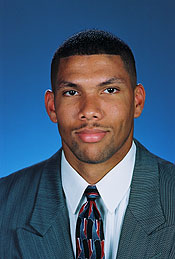 Hailing from Booker High School in Sarasota, Florida, Justin Hamilton played basketball at UF from 1999-2003, where he was the kind of lockdown defender that would make opposing fans use words typically reserved for XBox Live (a precursor to Corey Brewer, if you will).

A Billyball player if ever there was one, he ran the point smoothly and contributed as he was best suited, playing tight defense and distributing the ball around (he led the team in assists 39 times during his UF career). His college stats reflected his well-rounded game: in Florida's all-time record books, he finished his career ranked sixth in steals with 164, eighth in steals per game, and eighth in assists with 309.  He left Gainesville with career averages of 6.9 points per game, 48.9% shooting from the field (including 33% on threes), 73.9% from the charity stripe, 2.7 assists per game, 2.6 rebounds per game, .3 blocks per game, and 1.5 steals per game.

Unfortunately, the NBA was not in Hamilton's future, but like other players he found opportunity in Europe. He did quite a bit of moving around there: He spent the 2003-04 season with Greece's Ionikos NF, then after a stint with the NBDL's Roanoke Dazzle, returned to Greece with Iraklis Thessaloniki. 2005 saw him move to Spain with Real Madrid CF, and then on to Europe's Boot, Italy, playing the 2005-06 season with Montepaschi Siena.  Hamilton next traveled to Poland to play for Prokom Trefl Sopot from 2006-7. Since then, he's been playing in Belgium with Spirou Basket/Charleroi.

Having played on the Florida basketball team that made the Mike Miller finger roll-inspired run to the NCAA Tournament Final, Hamilton was no stranger to championship basketball, and continued his familiarization with the highest rungs of competition in Europe. While playing with Real Madrid CF, he was on the team that won the 2004-05 Spanish National Championship. Then, while playing with Spirou Charleroi, he won the 2009 Belgian National Cup, in addition to three Belgian National Championships (2007-08, 2008-09 and 2010-11).  Clearly, Hamilton isn't hurting for championship hardware.