Recruiting: There Is An App For Florida Target Kelvin Taylor

Share All sharing options for: Recruiting: There Is An App For Florida Target Kelvin Taylor

(It's an appetizing day around these parts! Yes, part of me died when I wrote that. — Andy)

As any good Florida Gators sports blogger or fan would do, I try to follow all the Gator players, commits, and recruits on Twitter. Most of them don't usually reply to having a new follower. It was certainly to my surprise when class of 2013 recruit Kelvin Taylor sent me a direct message that went a little something like this: 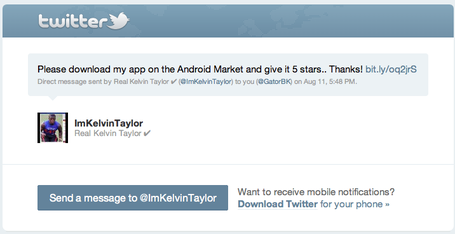 Kelvin Taylor, of course, isn't your run-of-the-mill running back recruit. A junior at Glades Day High, Kelvin Taylor is the son of former Florida great Fred Taylor. While Fred hasn't caught on with an NFL team for 2011, and has said he'll likely sign a one day contract with the Jacksonville Jaguars and retire, his son's career is looking to take off.

And his app is a legitimate app, and something that could start an epidemic when it comes to the recruitment of high school players. This app gives you up-to-the-minute stats on all things Kelvin Taylor. I'm sure he'll also announce his final three schools on the app before anywhere else — and the word is Kelvin is every bit as good, if not better, than his father is/was, so that could be a fortuitous "DROID" croak, indeed.

Having an app is actually very forward thinking for a kid who's just 17. (And I'm sure it helps his dad is a possible NFL Hall of Famer and a millionaire.) Is this the future of prep recruiting, though? Probably not, but it's a great way for statheads to keep track of him.