Share All sharing options for: Game Thread, Florida Vs. UAB: Free Sharrif, And Beat The Blazers

This is your game thread for the Florida vs. UAB game that kicks off in under half an hour from Ben Hill Griffin Stadium in Gainesville. Use it wisely. All sorts of schedule and TV information after the jump.

The game will be broadcast on Fox Sports Net in Florida, but it will also be available on ESPN3.com. (Via Only Gators.)

What to Watch For

Not Sharrif Floyd, who will get a chant between the first and second quarters to show support while he is serving the second game of a two-game period of NCAA ineligibility.

This red, white, and blue ribbon to commemorate the 10th anniversary of the September 11 terrorist attacks. (Via @MorganLPalmer.) 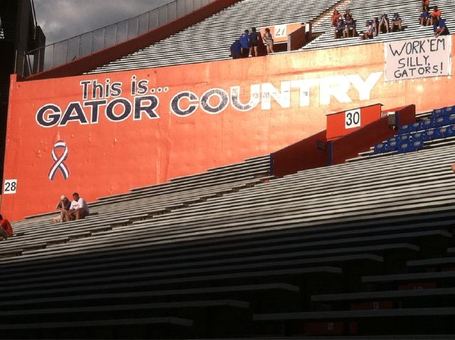 Blue jerseys, because they're back.