Video Analysis: Are the Florida Gators Cheating to Block Punts?

Share All sharing options for: Video Analysis: Are the Florida Gators Cheating to Block Punts?

Florida's proficiency at blocking punts since Urban Meyer came to Gainesville has been something for Gators fans to celebrate. Since 2007, the Gators have blocked 20 kicks and punts, and Chris Rainey's five blocked punts in that period are a Florida and SEC career record. But Kentucky coach Joker Phillips raised questions of foul play in talking to the Lexington Herald-Leader's John Clay on Tuesday:

Here is the Phillips quote: "Speed. Speed, you know, at which they come off. And their speed are big guys. Their linebackers and defensive ends are on their punt team. We’ve got receivers and DBs on our punt team to try and get that speed on the field. They’ve got big guys pulling this guy that way, and this guy thata way and a little fast guy with world-class speed comes up the middle to block it. And you can’t get off the block. We’ve got to punch them in the mouth when they try to grab you and get their hands off of you and come off and block the little guy that tries to split the gap."

Sure enough, Clay looked at the replay of Rainey's block against Tennessee in the Gators' 33-23 victory (Saturday Down South has video), and finds what looks like Dominique Easley pulling a Kentucky lineman so Rainey can fly through a gap and snuff the punt.

All together now: Uh-oh?

There are two ways to examine this as cheating: In terms of the actual rules of the game and in terms of what will draw ire. To the former: Yes, it's pretty obviously against NCAA rules.

Use of Hands or Arms by Defense

b. Defensive players may not use hands and arms to tackle, hold or otherwise illegally obstruct an opponent other than a ball carrier.

d. When no attempt is being made to get at the ball or the runner, defensive players must comply with Rules 9-3-3-a, b, c and d.

Unless you believe that Easley was honestly trying to get to the punter, I think you'll agree with me that his play was illegal. (This link describes a similar situation and judges it to be a flag-worthy offense.)

As far as the latter's concerned, it's apparently not really a big deal. Gator Country's Thomas Goldkamp noticed this on Monday, before Phillips brought it up, and didn't do much more with it than tweet it. And while it's possible that Florida's done this in games prior to 2011, that's not how the Gators got their first punt block of the year against Florida Atlantic. 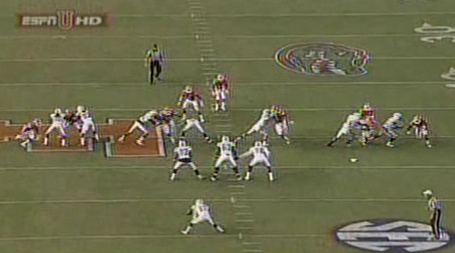 Thanks to ESPNU's full-field camera, we can see all the blockers individually engaged along the line, and we can see Solomon Patton, far left, come off the line unblocked. That's not because the man next to him is pulling or pushing, but because FAU chooses to double-team whoever is next to Patton.

But Patton being unblocked, something FlaGators noted two weeks ago is only part of the block; a terrible snap that bounced and went left, shifting FAU's punter to his left and delaying his punt, was the real culprit. 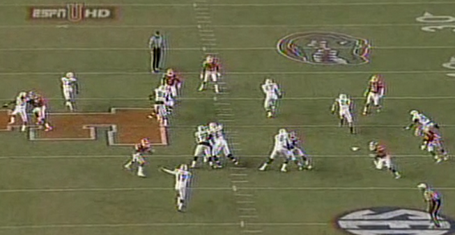 FAU's formation is wide enough at the line of scrimmage to prevent even the fastest edge rusher from getting to the prime punt-blocking spot a yard in front of the punter's foot in time to do damage. Throw in a bad snap that relocates that spot, though, and it's much easier for Patton to get there in time. In fact, had the snap gone right instead of left, I think Deonte Thompson, even with Patton in the above screengrab, would have blocked that punt. (I would imagine Florida Atlantic's punt protection changed after this game.)

From that analysis, I think we can safely conclude that Florida's punt block against Florida Atlantic was the result of speed and a special teams breakdown, not cheating.

The punt block against Tennessee, on the other hand, took a bit of trickery and some poor protection. 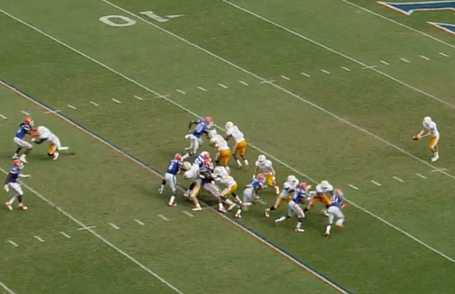 CBS doesn't have a full-field shot of the punt, but this HD screencap shows you everything you need to see. Yes, that's Easley, clearly engaged in pulling a Vol away from Rainey. And yes, that's Tennessee's lone blocker behind the line completely blowing the block he needed to get on Rainey. It's John Propst, a sophomore linebacker, who inexplicably drifts about a step to his right while Easley opens a chasm to his left, and it's Propst who really makes this block happen. Rainey shoots through untouched, certainly, but it's as much because of Propst's futility as Easley's holding. 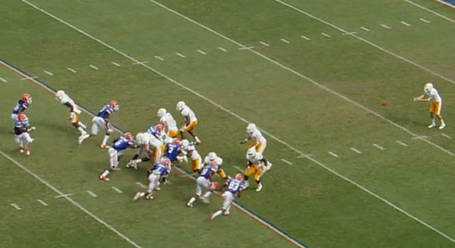 This is a screencap from about a half-second before Easley's pull/hold. Clearly, Rainey's already got his lane, and Propst is in position to handle him. Rainey doesn't break for the spot in front of Tennessee punter Michael Palardy until after the step to the inside by Propst, either, meaning that it's really Propst's vacation of the lane to Palardy that sets up Rainey's block. Easley can pull his man to the sideline or take him to the ground if he wants; Propst is still in position to block or divert Rainey, and simply doesn't.

Derek Dooley should be madder about his protenction than Easley — and is:

"That was something we worked on all week," Dooley said. "I started seeing it and probably should have called a timeout, but we couldn’t get it in time."

What Dooley saw was Rainey ducking behind the Gators’ big rushers up front and sneaking through a hole on the left side of the Vols’ line. Rainey’s fifth career blocked punt – a new school record and SEC record as well – gave the Gators the ball at Tennessee’s 13-yard line and led to another Caleb Sturgis field goal.

"That is their playmaker," Dooley said. "We thought we were prepared for it, but obviously we weren’t prepared enough. Rainey is a great player and they do a really good job of using him the right way."

I haven't gotten a chance to go back and look at old punt blocks — Patton's against Penn State in the 2011 Capital One Bowl, Rainey's against Kentucky in 2009 — but if I can find the time this week, I will. From the two punt blocks from Florida's 2011 so far, though, it seems like the cheating (and it is cheating) that Florida is doing is not the reason the Gators have gotten to opponents' punts.