Share All sharing options for: Theater of Operations, Florida Vs. Kentucky: Previewing Kentucky's Offense, And a Special (Teams) Bonus

You know, it was hard finding viable video on anything Kentucky. Sure, they are 2-1 on the season thus far, but they haven't really played all that well. The Wildcats are ranked around 100th in the country in quite a few team statistical categories. They don't really run the ball very well, they don't really have an effective passing game and their offensive line played like Swiss cheese against Louisville.

But that doesn't mean the Gators should take them lightly, especially with the meat of the SEC schedule coming up in short order. (Alabama, LSU, Auburn and Georgia in the next four games! Get excited!) Saturday's game against Kentucky, as we all know, will be the first road game for the Gators this year. 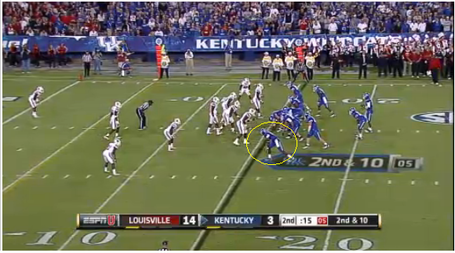 It is no secret that La'Rod King has been the most consistent wide-out for Kentucky this year. It isn't really even that close. In this play, Morgan Newton (QB) is lined up in the shotgun formation and King (circled) is going to run a corner end-zone route (for the most part). 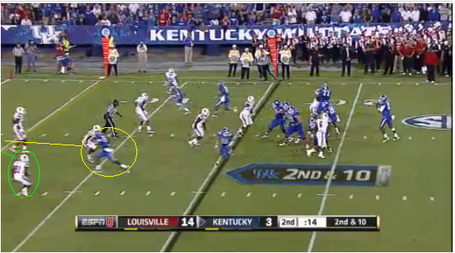 King (circled) runs downfield until about the goal line and then runs parallel with the line. The two defenders closest to him that aren't circled aren't in coverage on King. There is a safety (shown later) and a defensive back (green circle) that are involved in the coverage on King. 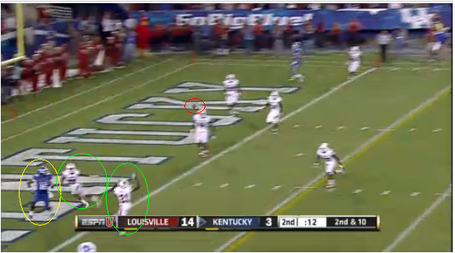 And there is the double coverage. This is actually a very good throw by Newton to the outside of the receiver. It will go just over the outstretched arms of the cornerback and just ahead of the safety covering the inside shoulder. 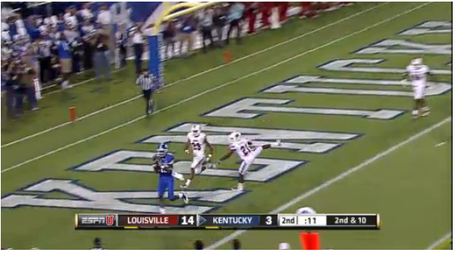 What you can't see by the pictures, though, is that Newton didn't take his eyes off of King for the entire play. That kind of lockdown on a receiver isn't going to work against the Florida secondary. I don't care how inexperienced the secondary is.

This is just pure speed (and a little power) off the edge. It was helped out by Kentucky's overall poor offensive line play, though. 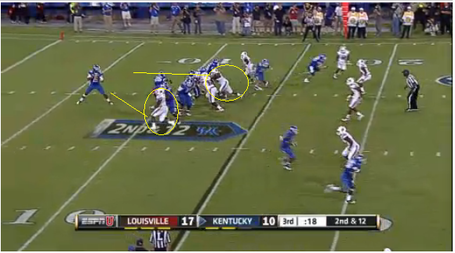 The defensive end does do a nice shimmy to get out from the block. 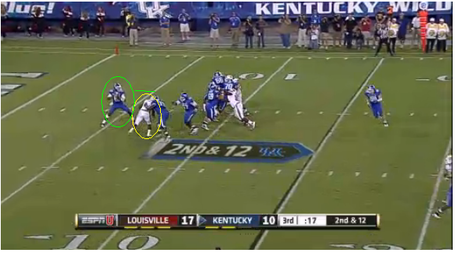 Newton attempts to move forward to avoid the rush. But he falls (literally) right into the hands of the defensive tackle. 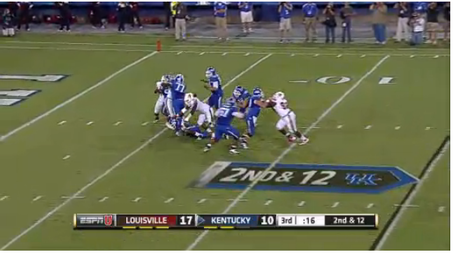 Kentucky gave up six sacks to Louisville. They were all pretty much similar. Actually, the Wildcats have been sacked quite a bit this season: 12 in total, tied for third-most in the nation. That's a serious advantage for the Gators.

Considering who the Wildcats have played thus far this year (Western Kentucky, Central Michigan, Louisville) the fact that their offensive stats at this point are rather bad bodes really well for the "animalistic" Gators defense. If the Gators don't absolutely dominate this game from a defensive standpoint, they could be in a lot of trouble in the near future.

The Gators' special teams dominance over Kentucky throughout recent times is well-documented. This tidbit from SB Nation's Kentucky Wildcats blog A Sea Of Blue about Thursday practice shows that some things don't change:

Special teams had several problems today.  Phillips didn't elaborate, but it scares me to think that it was either in punter protection or coverage.  Kentucky has to cover and they have to keep Florida off our punter for UK to have any chance to pull the upset.

The Gators special teams unit has to be smelling blood in the water already.