Theater of Operations will be a regular feature (Sunday, Monday or Tuesday mornings) in the coming months reviewing film from critical moments in Florida Gators football games. The film reviews will not always focus on the running game or the passing game. Sometimes they'll be on things like the defense or special teams. You get the idea.

Against Florida Atlantic, Jeff Demps and Chris Rainey combined to rush for 184 yards and three touchdowns. That's not a bad day at the office by any means. What is even more impressive is that they averaged a combined 8 yards per carry. In other words, that type of an average makes it a whole heck of a lot easier to convert second and third downs.

I know this came against Florida Atlantic and all, but still, last year's opener against Miami of Ohio was a lot different.

The first play I want to look at is Demps' second down 22-yard scamper in the first quarter: 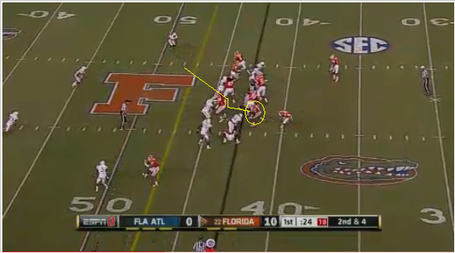 What makes this run impressive is the fact that the offensive line did a phenomenal job in holding off the blitz long enough for Demps to break it up the middle untouched. The block that set the play was made by Kyle Koehne (No. 64, the one with the straight line on his back) who did as good as job as you could expect.

The only problem I have with this play and probably the reason why Demps failed to run it into the endzone is Denote Thompson (44 yard line, the highest Gator on the screen) he was in perfect position to take out the top DB who is situated on the 50. But, he missed on the block, which in fairness to Deonte, was the result of a cut by Demps. Still though, minor things to work on.

This second picture, is the one of Demps' 35 yard touchdown run to open the 2nd quarter: 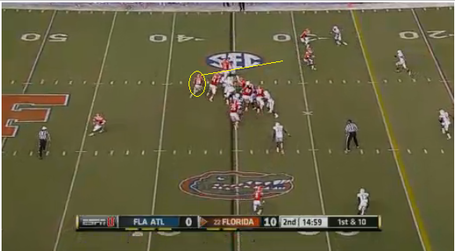 Now this is what I like to see. Great blocking from the receivers on this play. Thompson (above receiver) and Hammond Jr (below receiver) both take out their man, which means that Demps has a relatively easy run to the endzone from there. Thompson clearly makes up for his earlier miss (noted above). Again, the solid blocking by the offensive line all game was a huge factor in the overall success of the running game.

This next play is the second rushing touchdown on the day for Demps: 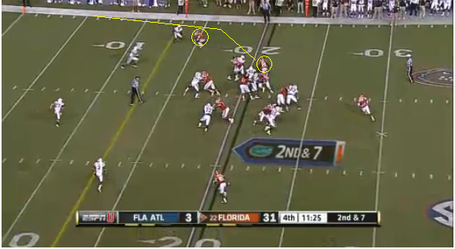 On this play, you'll notice two yellow circles. The lower one is of course Jeff Demps. The higher of the two circles is Andre Debose who executes his block to perfection. Once Debose takes out his blocker, Demps has by far, his easiest touchdown run (and probably overall run) of the game. This play is also noteworthy for another reason. It shows that Debose understands his assignment on this play. Which shows a marked improvement already over last season.

The final running play that I wanted to look at was Rainey's 14 yard touchdown run in the 2nd quarter: 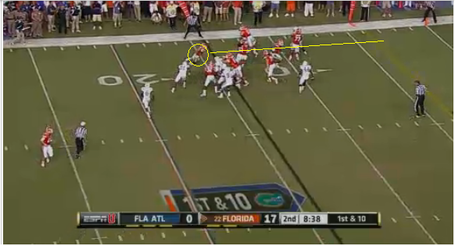 There is a lot of action in this picture. Offensive lineman are everywhere down the field blocking everybody in sight. Matt Patchan, Jon Halapio, Jonotthan Harrison, and Xavier Nixon cleared the way for Rainey. Of course, all that occurred after Rainey preformed an amazing spin move to evade a tackler or two.

Overall, this was a predictably dominating performance by the running game. We should continue to see a lot of this as the season progresses. Because whether we like it or not, we are a better running team than passing team.