Previously in the Theater of Operations: the running game against FAU.

One of the most disappointing aspects of the 2010 season was John Brantley's struggle to key a consistent passing attack. We all know that. But 2011 is a brand new year.

Some of us still have questions. And while at some level those are legitimate questions, it is still early in the year. Vanilla offenses and shaking off the rust are staples early on for teams like Florida.

I think it is safe to say that nearly everyone (from coordinators to receivers to backs) looked exponentially better than last year in Florida's opening win against Florida Atlantic. The receivers appeared to run crisper routes. The quarterbacks appeared to make sharper throws. And you can see some examples of that after the jump.

Here we have a Brantley pass to Jordan Reed, good for a 15-yard completion and a first down: 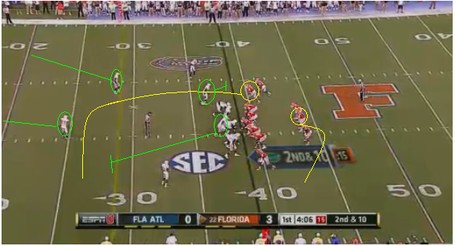 Aside from the fact that two players (both players close to the line) on FAU's defense had absolutely no clue what they were doing. The fact remains that Florida is lucky to have even completed the pass. The two aforementioned players having a lot to do with that of course. 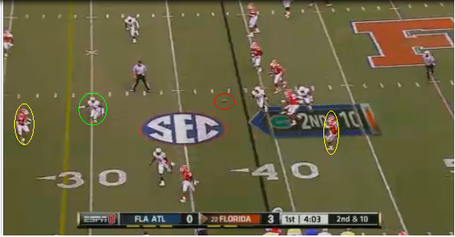 As you can see, Brantley has three options to throw to, but picks Reed. Why did he pick Reed and not the receiver at the top of the screen? Well, that's because Brantley, who is a right-handed quarterback, is rolling out to his left. Making a throw like that is always dangerous. The receiver to the bottom of the screen is well covered. But still, to complete this throw to Reed, Brantley has to pause, shift his entire body and put a lot more on the throw than he normally would have to. The bottom line is that it is a difficult throw to make but if you have a smart quarterback, it is worth the risk.

This next play is Chris Rainey's 14-yard touchdown reception: 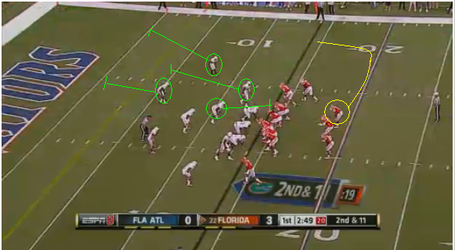 Why were the Gators so successful throwing the ball out in the flat? This play is a perfect example. Every single FAU defender in the area is retreating, either afraid of or trying to prevent getting beat deep. This, in turn, left the flat open all night long. 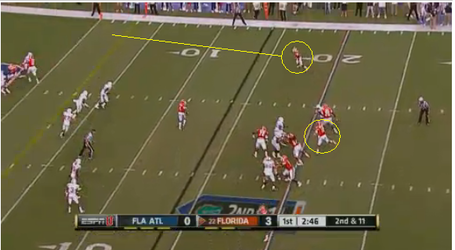 A quick cut at around the five-yard line, and Rainey goes in for a rather easy touchdown.

Brantley's first interception was tipped at the line; that's not really his fault. But this next play is Brantley's third quarter interception in the endzone: 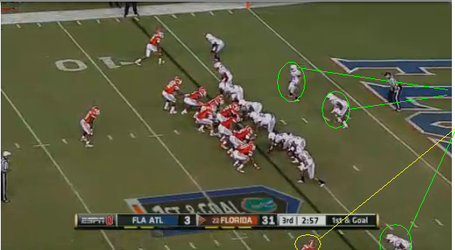 This was by far Brantley's worst throw and moment of the night. Throwing it into triple coverage is never a good idea. Unless the game is on the line and it is our only option, I would hope we never do it. Throw the ball away, Johnny! As clearly shown, this was on first down. 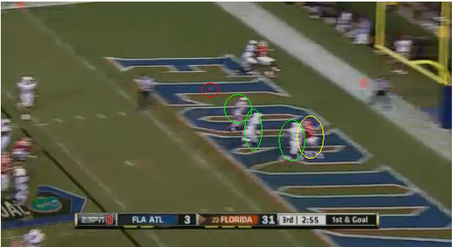 (Photo courtesy of ESPN) - Sorry for the blurred photo. There was nothing I could do.

Three on one. Horrible decision. Nothing else needs to be said.

The final play of the quarterback breakdown is Jeff Driskel's interception just before the end of the first half: 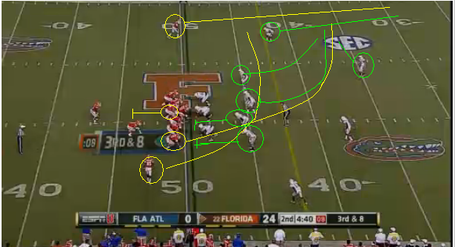 The way I see it, Driskel had two choices. One of them being the underneath (and correct) receiver and the other being the downfield receiver. Guess which one Driskel chooses? If you guessed the one into triple coverage, you guessed correctly. 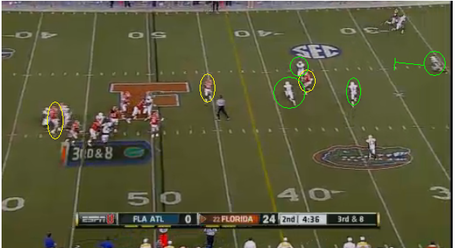 At this exact moment, the ball, terribly overthrown, is intercepted by the defender circled at the 25-yard line. So it is actually the fourth defender in the area who intercepts the ball. If Driskel hits the underneath receiver, it is a guaranteed first down. But as this was his first career pass attempt, I'm sure he was a little nervous.

When it was all said and done, it was a decent performance overall by both Florida quarterbacks. There were a lot of things to like from the both of them, but at the same time, there were a few things that need to be looked at.