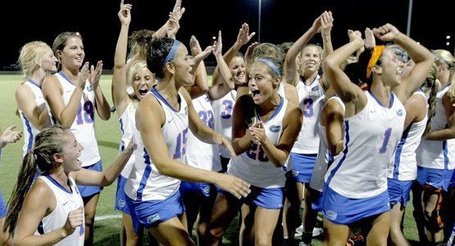 You have to assume England's national women's lacrosse team, currently ranked fourth in the world, was tired Thursday. Following their long flight to the states, it narrowly defeated Jacksonville University Wednesday night in a hard-fought match before heading to Gainesville to face the No. 5 Gators at Donald R. Dizney Stadium on Thursday. Still, Coach Amanda O'Leary has to be excited with her squad's 17-2 win, especially with the performance of the newest Gators team members. The No. 3-rated recruiting class from a year ago scored 12 of the Gators' 17 goals in the victory, led by Gabi Wiegand, a junior transfer from University of Richmond, who scored five goals and added two assists for Florida. Freshman Nicole Graziano contributed four goals for the orange and blue and All-American Kitty Cullen added three goals.

Junior goalkeeping duo Mikey Meagher and Cara Canington split time in goal, with each holding England to a single goal in 30 minutes of play. The Gators outshot England 32-13 for the match.

The Gators open the regular season on Saturday, February 11 in Chapel Hill, North Carolina against the No. 3 Tar Heels.

I am certainly still learning the sport, but I am extremely excited about this year's team. The Gators return every player from last season's team that finished ranked No. 5 and appear to have added several talented players to the mix. I am optimistic that Florida has all the tools to make a serious run at a national championship in its third year of existence. The UNC road match will be a good measuring stick for the strength of this Gators squad.